An Abundance of Katherines (Audio) 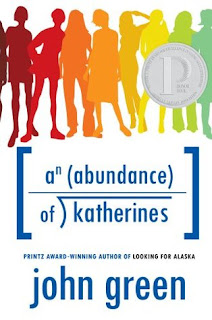 Colin Singleton has dated 19 Katherines and been dumped by them all. After his latest dumping by K19, he heads out on a road trip with his best (and only) friend Hassan. They end up in Gutshot, Tennessee where they meet Lindsey Lee Wells, whose family owns the local tampon string making factory. Here Colin learns that people are unpredictable and that not everything revolves around a Katherine.

It took me a long time to get through this book. Not because it wasn't good but because I was listening to it at work and didn't have a lot of opportunities to listen to it recently. I only mention this because, since it took me so long, this felt like a long book and it's not. If I had just read it, I would have had it done in a couple of days, a week max.

For the most part, I enjoyed this book. I liked the concept. Colin was not my favorite character though. He was really whiny and self-absorbed which was the point of his character, I know, but still. I liked Hasson and Lindsey Lee Wells a lot and I like how they called her boyfriend TOC (The Other Colin). That was funny. Jeff Woodman was the narrator and he did a fairly good job, but I would still recommend reading this instead of listening to it.
Posted by Andrea