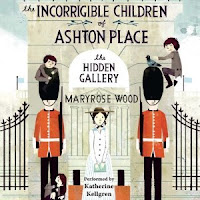 This is a charming series. It combines some of my favorite things: historical childrens books, mysteries, and some asides. It reminds me of A Series of Unfortunate Events, maintaining the same cheeky tone without being quite so gloomy and depressing. Miss Lumley is a delight and I love how she handles the children and how much she cares for them. For example attempting to "rescue" them from the zoo by trying to ride a velocipede. I love that. She is a good girl and very curious. The mystery doesn't make any real headway, mostly the events of the book just add more questions but I am very interested to see what will happen next.

Katherine Kellgren narrates this audiobook and once again does a fine job. Her howling and all the voices she does really show how much effort she puts into acting out an audiobook and that is why she is one of my favorite narrators.

Eight years after the events of Graceling, Bitterblue is the queen of Monsea. Dealing with a kingdom waking up from Leck's evil leaves Bitterblue confused, bored and lonely with little clue about how her kingdom really is, she decided to venture of the castle to find out. This one decision leads her down a path filled with first love, assassins, and the truth behind who Bitterblue really is and what she had to do for her kingdom.

I enjoyed this sequel to Graceling. I had wondered about Bitterblue and how she was going to handle becoming the queen of Monsea. And this book explores that and more. Katsa and Po have roles in this though Katsa only makes a few appearance while Po is in the book the majority of the time with a much smaller role that in Graceling.


Bitterblue was basically the story of a kingdom unable to come to terms with the terror and atrocities that took place during Leck's rule. Some wanted to talk about it. Others were unable to deal with it and wanted to hush up the "truthseekers" fearing blame and recriminations from them. Bitterblue is confused and sort of straddles the line between the two. She wants to remember but remembering hurts and no one really knows why Leck did what he did. There is, of course, more to the book than that. Bitterblue finds and loses love, her advisers are deeply traumatized and she doesn't know what to do with them, there are conspiracies in every kingdom and the Council makes many an appearance. And there is an awesome librarian named Death.

(SPOILERS) I had assumed (rightly so it turned out) that the events in Fire would be tied into Bitterblue somehow and they were to a degree. I wish there'd been more with Fire instead of a few chapters if that. I don't know what I wanted but I wish she'd been a little more involved.

Stephanie Plum returns from a trip to Hawaii to find that once again people are after her. This time they are after a photo that they think was given to Stephanie aboard the plane. But Stephanie doesn't have it. So not only does she have to deal with a pair of inept thugs but she has a crazy assassin and a ditzy hairdresser after the photograph and none of them will believe that she is not in possession of the picture. On top of that Stephanie has problems with a purse snatcher stealing her car and tracking down her old nemesis, Joyce Barnhardt, who is a person of interest in a murder investigation and who has skipped out on her bond. It's just a typical adventure for Stephanie Plum.

The mystery of who Stephanie takes to Hawaii at the conclusion of Smokin' Seventeen is solved. Unfortunately it ended badly and Stephanie doesn't want to talk about it until halfway through the book. So in addition to waiting on that mystery to be solved plus the other standard ones that come with the book and Stephanie's inability to still catch a skip, it made for a good if maddening book. Seriously why can't Stephanie just catch someone easily for once? It borders on stupidity at this point. But I guess if she were a adapt bounty hunter the books wouldn't be as funny. I still like reading them but I really wish she'd pick a man and either get a new job or learn how to do this one better. It was still a funny book though the subplot with Joyce Barnhardt was wrapped up pretty neatly and quickly after spending a lot of time on it as was the main plot come to think of it.

All Lizzy wants to do is lead a normal life baking delicious cupcakes. But her dreams are interrupted by Diesel who informs her that she has a special gift of sensing magical energy trapped in objects. Now the two of them are after  seven powerful stones each imbued with the essence of a deadly sin. This time it is the Luxuria Stone also known as the lust stone. Between Diesel's evil cousin Wulf and a crazy lady calling herself Anarchy, Diesel and Lizzy are going to have a hell of a time retrieving it.


I am enjoying this series. I think Lizzy and Diesel make a good team and their adventures are pretty funny. I love how all these weird things happen and Lizzy just takes it in stride, for the most part. The scavenger hunt they go on to find the Luxuria Stone is pretty interesting and takes up most of the book. I really wanted there to be more when they did find the stone but it was still a good book. The addition of Anarchy is interesting and she makes for a better villain than Wulf because she is just crazy. Sometimes I get a little tired of Janet Evanovich's penance for ending a book on a cliffhanger or in the middle of interesting scene and that is what happened here. But I will definitely continue to read this series.


Second in the Lizzy and Diesel series
#1 Wicked Appetite
Posted by Andrea 4 comments: