Right now I'm reading Switch by Carol Snow. The short of it: a girl can switch bodies with others during lightning storms. I am listening to The Book Thief by Marcus Zusak at work and in the car right now. I was listening to Charlie Bone and the Castle of Mirrors but the last disc was messed up so I'm waiting for a new set and then I will finish it. Next will be Charlie Bone and the Hidden King for the car and probably All American Girl (Meg Cabot) at work if I can get Ready or Not to follow right behind it. I like reading series together and not splitting up the books as much as I can help it.
I recently finished Savvy (Ingrid Law) and Wondrous Strange (Livingston) and I working on reviews for both. Both were excellent and Savvy is a Newbury Honor so there's that.
I also got a big donation from someone who was on the Newbury Committee and it was generally books we don't add, mostly YA and Children's of course, so I boxed up the ones I wasn't interested in and shelved the others to read before the next book sale. So I have a ton to read and keep getting more in!
Posted by Andrea No comments: 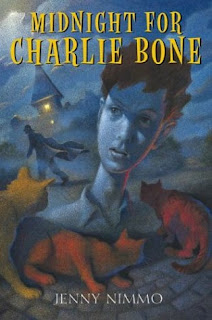 I have been listening to the Charlie Bones series and just finished Charlie Bone and the Invisible Boy. All the books are narrated so far by Simon Russell Beale and he does an excellent job with the voices and mannerisms. In my opinion, audio books are good only when the narrator is good. I've heard so awful books that I couldn't finish because the narrator just does a flat read and does put any personality into the book.
Anyway, I was afraid Charlie Bone was going to be Harry Potter-redux since they are both about young boys who can do magic and go to a special school and the titles are Charlie Bone and (fill in the blank) but they have more of Roald Dahl feel. The aunts, especially, are in league with the best adults in a Dahl novel. However, Charlie does have his mom and his maternal grandmother as well as the help of Cook and his uncle and the occasional teacher.
Basically, the background so far is this: Charlie lives at home with his mom and two grandmothers, Maisie Jones, his mother's mother who is very nice, and Grizelda Bone, his father's mother who is a nasty pieces of work as well as his paternal uncle, Paton Yewbeam. Charlie finds out that he is "endowed," which means he has a special ability like his uncle Paton. Charlie can hear pictures speak and see them move and Paton is a power-booster who often shatters light bulbs accidentally. Since Charlie is endowed he is made to go to a special school called Bloor's Academy where the children are either gifted in the arts or are endowed. There Charlie meets other endowed children and makes friends with Fidelio Gunn, a gifted musician.
Charlie is a kind boy who cannot help but try to help those in need. In the first book, he helps a hypnotized girl, the second, a boy who is "lost" in time, and the third, an invisible boy as well as his uncle. He tends to rush headlong into situations but is good at recruiting people to help him. But it is just as well cause things seem to be coming to a head at Bloor's.
Like I said, I've only listened to three of the books but I, unfortunately, have to break to listen to Brisingr. But I can't wait to get back to Charlie.
Posted by Andrea No comments:

Based on a Book Movie Reviews OLD PAGE

Occasionally I write based on a book movie reviews for challenges and so on.  I would like to do more of these in general.

10 Things I Hate About You

Cloudy with a Chance of Meatballs

James and the Giant Peach