Floors and 3 Below by Patrick Carman (Floors series) 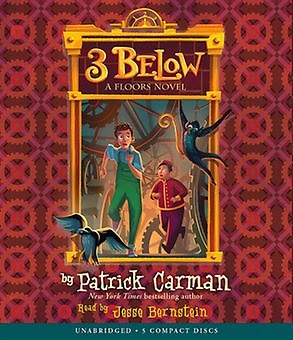 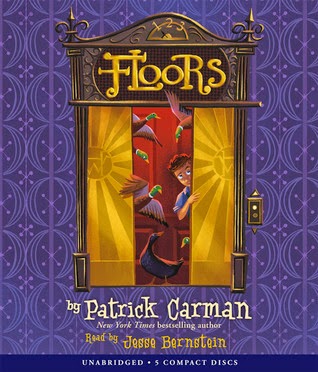 Floors
The Whippet Hotel is a strange place full of strange and mysterious people. Each floor has its own quirks and secrets. Leo should know most of them - he is the maintenance man's son, after all. But a whole lot more mystery gets thrown his way when a series of cryptic boxes are left for him . . . boxes that lead him to hidden floors, strange puzzles, and unexpected alliances. Leo had better be quick on his feet, because the fate of the building he loves is at stake . . . and so is Leo's own future!

3 Below (Floors #2)
Now that Leo has uncovered a few secrets behind the wacky Whippet Hotel, he'll have to save it!

Leo has explored the zany, wonderful Whippet Hotel from basement to top floor, with trains, flying goats, and mazes (among other things) in between. But even Leo doesn't know every secret of the Whippet - and when he discovers that there's more beneath the hotel than he'd thought, it doesn't take long for more adventures to unfold!


So I've managed to get my 8 year old hooked on audio books. Not a bad thing in my opinion. We started with Peter Nimble and His Fantastic Eyes, then Peter and the Starcatchers, and then Floors followed by 3 Below. He likes the wacky adventures in the hotel and requested the second book when we finished Floors. I think they are cute books. I also like the wacky adventures and the humor, though it verges a lot into burp jokes in 3 Below, is still funny. The narrator, Jesse Bernstein, does a great job with the stories. I'm sure my son likes these books since the idea of a 10 year old working and running a hotel appeals to him in the same way running away to the Metropolitan Museum of Art did for me.
Posted by Andrea No comments:

Hey y'all!
Right now I'm listening (again for the 4th or 5th time) To Say Nothing of the Dog, Or How We Found the Bishop's Bird Stump At Last by Connie Willis. Some books are just worth reading over and over again. I plan on getting to The Blood of Olympus after. My son and I are getting ready to start Escape from Mr. Lemoncello's Library by Chris Grabenstien, a recommendation by a co-worker.

As for reading, it's hit or miss with me right now. I started Blue Lily, Lily Blue but didn't get very far. I'm trying, but reading is just not happening for me right now. So reviews are going to continue to be scattered and may become more like "micro-reviews" than anything I've written thus far.
Posted by Andrea 1 comment: