Evolution, Me and Other Freaks of Nature (audio) 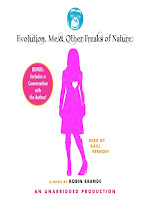 Mena is having a hard time lately.  Ostracized by her church for telling on the youth group, she is also blamed for the lawsuits against all their parents and the church.  See Mena's youth group did something that wasn't very nice and when Mena apologized to the victim, all hell broke loose.  Adding to this is her new science teacher who wants to teach evolution against the objections of that church and her geeky cute science lab partner.  Mena has to learn how to stand up for herself and why it is ok to stand up for others.

This was my pick for the World Religion Challenge for two reasons.  One, it shows the bad side of Christianity.  The judgmental "Christians" who give the rest a bad name.  Mena's formers friends are the mean girls of the church, meaning they are very popular but also very bitchy.  And no one calls them on it because it is all in the name of doing God's work, so they say.  And pardon me for saying so but this are the kinds of Christians that I can't stand.  Holier than thou and meaner than hell, the good Christians who go to church regularly and spout the Scripture but treat others with contempt and disrespect.  And that is how the church kids in her class treat Mena.  All because she wanted to put a stop to contemptible behavior.  But she takes the pushing and verbal abuse like she deserves it and doesn't realize at the beginning that she can tell them to stop.  She is so worried about what they think of her.  She reminded me of a Meg Cabot character at times.  When she starts obsessing about a boy and thinking she is not good enough for him and worrying about her friends and her parents,  Mena grated a bit.

But it's the second reason that I choose this book that is why I really liked it.  Mena's journey to reconcile evolution with the Bible and the way she was brought up so extremely interesting.  She doesn't want to sacrifice her beliefs for science, but she knows that science is right.  So she goes about figuring out how she can believe in both.  She also learns about self-respect and integrity and standing up for what you believe in. That was where this book really interested me.  I was annoyed at times when she went on and on about the boy, but I recognize that this is a YA novel so there is bound to me some of that.  But I was glad that it went deeper.
Posted by Andrea