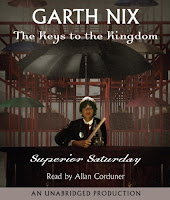 Arthur Penhaligan has wrested five of the Keys from their immortal guardians, the Trustees of the Will. But gaining the Sixth Key poses a greater challenge than any he has faced before. Superior Saturday is not just one of the Trustees – she is also the oldest Denizen and the most powerful and knowledgeable sorcerer within the House. She has tens of thousands of sorcerers at her command, and she has been preparing her forces all along for the Will’s escape and the activities of the Rightful Heir.


As Saturday’s schemes become evident, Arthur is beset on all sides. The House is being destroyed, and only the power of the Keys can hold back the tide of destruction. Arthur’s home city is under attack. His allies are unreliable. He can’t even get into the apparently impregnable Upper House . . . and even if he does, finding the Sixth Part of the Will and gaining the Sixth Key might not be enough to counter Saturday’s bid for ultimate power.

On the sixth day, there was sorcery.

Out of all the books this is the only one that I actually will call filler.  I say this because despite appearances not much really happens.  Arthur has to figure out how to get into the Upper House so he visits the Lower House and then the Border Sea.  The Raised Rats help him get into the Upper House and he figures out where Part Six of the Will is and rescues it.  Then he is forced into the Ram with Superior Saturday to assault the Incomparable Gardens where Sunday lives.  The thing is that Saturday had to have a book of her own or the series doesn't work, but the action only moves Arthur along and the significant events don't happen until about three-quarters of the way.

We do find out Saturday's plan though.  She was the first Denizen made by the Architect and envies Lord Sunday high in the Imcomparable Gardens as she thinks that is where she belongs.  He taunts her with glimpses of the floor of the Gardens, further enraging her.  So she makes a plan to get the lower parts of the House to fall in order to reach the Gardens and defeat Sunday.  She doesn't seem really worried about Arthur, using him like a tool instead (well, until that last bit anyway).

So most of this book is a set-up for the seventh book, Lord Sunday, which I can't wait for.  Hopefully, all the questions about Arthur and the Will and the Architect will be answered.
Posted by Andrea