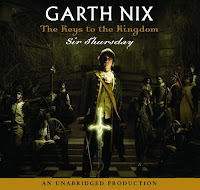 From the book jacket:
Following their adventures in the Border Sea, Arthur and Leaf head for home. But only Leaf gets through the Front Door. Arthur is blocked because someone . . . or something . . . has assumed his identity and is taking over his life. Before Arthur can take action, he is drafted by Sir Thursday and forced to join the Glorious Army of the Architect. While Leaf tries to banish Arthur's doppelganger on earth, Arthur must survive his basic training, avoid getting posted to the Front and work out how he can free Part Four of the Will....

On the fourth day, there was war.

It's rare for a long  series to maintain a great storyline through the whole thing.  A Series of Unfortunate Events suffers from this, at 13 books not all of them are great, but the Keys to the Kingdom holds up really well.  Sir Thursday, though good, is not my favorite of all of them.  Maybe because Sir Thursday's sin  is wrath and the Will's virtue is justice and I find both Sir Thursday and Part Four of the Will to be really annoying.  I do like the exploration of the military mind and the different results of following orders despite common sense or because of it.

This is also the book where the point of view switches between Arthur and Leaf.  On my first reading, I wasn't too fond of that, but recognized that there was no other way to get the story across.  It didn't bother me this time though and I enjoyed Leaf's adventures with the Skinless Boy.  The ending is a little abrupt which will be the hallmark of the rest of the series from here on out, but there is at least some closure by the end and a great lead-in for Lady Friday.
Posted by Andrea