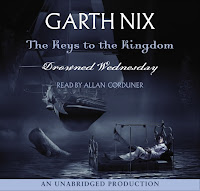 Book jacket:
Everyone is after Arthur Penhaligon. Strange pirates. Shadowy creatures. And Drowned Wednesday, whose gluttony threatens both her world and Arthur's. With his unlimited imagination and thrilling storytelling, Garth Nix has created a character and a world that become even more compelling with each book. As Arthur gets closer to the heart of his quest, the suspense and mystery grow more and more intense. . . .

On the third day, there were pirates.

First off, let me say that Drowned Wednesday is one of my favorite in the Keys to the Kingdom series.  I love the cover for some reason, all the blues and Arthur on the bed and the whale and ship.  It all looks so mysterious.  I always love the character of Drowned Wednesday and what has happened to her.  I guess it is because she is a more sympathetic Trustee than any of the others.  I like the sea and sailing aspect of this book and the pirates too, of course.  I love how the Parts of the Will embody a virtue but also how annoying they are without something to temper their fervor such as Part Three, who embodies Faith.

More and more of the mythology and mystery to the House and the Architect is revealed although just enough to tantalize.  And Arthur is becoming a stronger, more decisive character.  This is probably an influence of his adventures as well as his contact with the Keys.  Leaf has a more active role in this one though not as much as the other books.  And Suzy is a treat as always.
Posted by Andrea