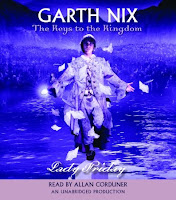 Jacket:
Four of the seven Trustees have been defeated and their Keys taken, but for Arthur, the week is still getting worse. Suzy Blue and Fred Gold Numbers have been captured by the Piper, and his New Nithling army still controls most of the Great Maze. Superior Saturday is causing trouble wherever she can, including turning off all the elevators in the House and blocking the Front Door. Amidst all this trouble, Arthur must weigh an offer from Lady Friday that is either a cunning trap for the Rightful Heir or a golden opportunity he must seize - before he's beaten to it!

On the fifth day, there was fear.

Arthur continues his almost relunctact quest through the House, claiming the Keys and finding the Parts of the Will.  This time he is tricked into the Middle House by Lady Friday who claims she is abdicating her position in the House.  But Arthur must race the Piper and Superior Saturday's minions to claim the Fifth Key and he must also free the Fifth Part of the Will.  Sadly, I think that this is one of the filler books in this series.  Lady Friday never seems to poise a real threat and isn't even really present in this book.  Her vice is suppose to be Lust and I can see that, but addiction should be added to that given what she lust after (mortal feelings).  And the Will is much more bearable in this book.  While the book alternates between Arthur and Leaf, I was much less interested in Leaf's adventures this time, though she is an excellent character.
Posted by Andrea