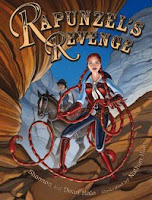 Everyone knows the story of Rapunzel, the girl whose parents gave her away and was locked in a tower by an evil witch.  Well, what if instead of being rescued by a prince, Rapunzel gained some awesome fighting skills and saved herself.  And that's where this graphic novel gets good.  After growing her famous hair, Rapunzel rappels down the tower and almost immediately meets Jack, of the Beanstalk variety.  Determined to rescue her real mother, Rapunzel and Jack set off across the witch's land and meet a variety of people oppressed by her.  Through this adventures, they learn about the witch and decide that they must do something about her too. 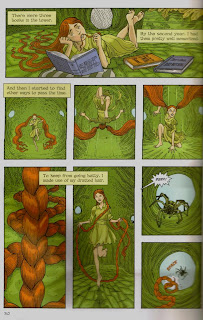 Weirdly this is the first graphic novel that I've reviewed for this blog although I mostly read manga.  I liked the art in this book.  It reminds me of line art a lot.  I liked that Rapunzel was a red head and the western theme going on in the book.  Some of the adventure stop-offs felt tacked on, but they are there for a purpose and add some expedition to the story.  The ending was quick but dramatic and the very end was sweet.  I've heard there is going to be a sequel and I look forward to that.
Posted by Andrea