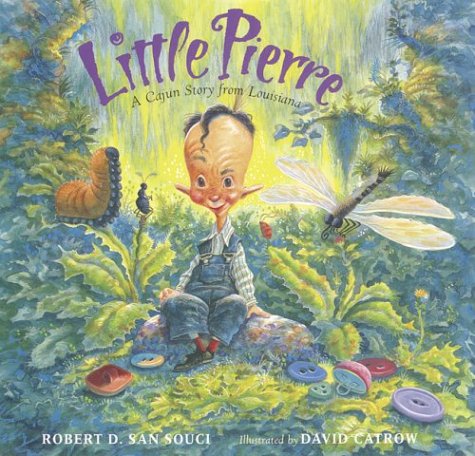 Jacket:
Little Pierre may be small, but he's got more marbles rolling round in his itty-bitty noggin than his four big, lazy brothers heaped together. Yet they just call him runt and ignore him. Course, when the good-for-nothing brothers flub their attempt to rescue a damsel in distress from the Swamp Ogre, it falls on Little Pierre to rescue them. Will this half-pint hero find out that his brothers were right all along--brains don't beat brawn?
Robert D. San Souci and David Catrow, the creators of the acclaimed Cinderella Skeleton, serve up a Cajun-spiced Tom Thumb tale straight from the Louisiana bayou.

While I don't usually review picture books, I just loved this one.  It is a Cajun version of Tom Thumb which is one of the reasons I had to have it for my boy.  I'm from Louisiana and live in the heart of Cajun country, if you didn't know, and so I like to get books that are from here or about here.  And also I love David Catrow's illustrations.  He has illustrated some of my other favorite picture books, including Take Me Out of the Bathtub.  Robert D. San Souci is the author and he does a pretty good job of  getting the language right although I don't know if people who have never heard a real Cajun accent will get it right.  I have a hard time with it and I'm from here!  But you have to be a real Cajun and have grown up with it to understand it.  Anyway, this was a very cute take on the Tom Thumb tale though I do wonder why it wasn't called T-Pierre instead of Little Pierre (if something is,like a boy, is small they are often called T, like T-boy means little boy).  Maybe to appeal to a wider audience?  I don't know.  But I was glad to have added this to the little man's book collection.
Posted by Andrea