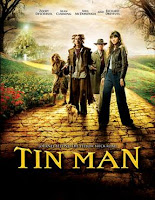 Since I read the Wizard of Oz I found this mini-series from 2007 that tied in with it.  It is a alternate retelling of that book mixed with a few elements from the movie.  DG is a waitress living on a farm with her parents when she is whisked away one night during a tornado.  She winds up in the O.Z. (Outer Zone) where she meets Glich, a man with half a brain (Scarecrow), Raw, a lion-like telepath (Lion), and Cain, who was imprisoned in a literal tin man, and is now looking for the man who put him there (Tin Man).  Together they work their way around the O.Z. with DG trying to find her way home and finding a lot more about herself than she knew existed.

But it was good movie, if a little uneven, especially in the visuals department.  Sometimes they had beautiful effects and the other times the special effects were meh.  The story was very cool and I like the whole idea of it.  If you are a Wizard fan or a fan of sci-fi, I would check it out.
Posted by Andrea

Email ThisBlogThis!Share to TwitterShare to FacebookShare to Pinterest
Labels: based on a book, movies, reviews, Wizard of Oz