The Year of the Flood (audio) 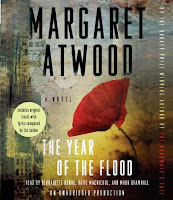 Told in alternating voices, The Year of the Flood is the story of Wren, Toby, and the Gardeners before and after the "waterless flood" strikes down most of humanity.  We learn how they survived lived their lives and how they survived.  A sequel/companion to Oryx and Crake, we learn the backstory for some side characters and what happens after the flood.

I didn't read Oryx and Crake first.  I meant to, then didn't, then got The Year of the Flood not realizing it was the second one.  I don't think it matters.  This book fills in information not given in the Oryx and Crake and gives a different perspective of the end of humanity as we know it.  I don't know if it would have made a difference or not.  I am intensely curious though about it and it's next on my list of audio books.

I am extremely impressed with Flood.  The individual stories of Wren and Toby are so intriguing and I became deeply invested in their stories.  The story of their lives with the Gardeners, an eco-vegetarian group, and then how they each survived the flood was brought out at just the right measure.  Both women were sympathetic characters who each survive some disturbing things.  The world they live in has desexualized sex and sex is sold as if it were nothing along with drugs and other commodities.  They are the corps who control all the goods and services and the privileged people who work for them and live in their compounds.  And then there is everyone else who live in the pleeblands, the commoners.  It doesn't really get into how the virus that kills off most of the people is made (I think that is mostly in Oryx), but it tells how some people survived.

The audio was narrated by three people, Bernadette Dunne, Katie MacNichol, Mark Bramhall, and they did an excellent job providing voices to Wren, Toby, and Adam One.  I really like their voices and how they were so solemn.  There was even recorded versions of the hymns they sing in the book so that was neat.  It was a very well done audio version of an excellent book.