Amazingly enough this was the first time ever reading The Wonderful Wizard of Oz.  I don't know why.    I found it to be a very sweet, simple story although with more parts than the 1939 movie.  Dorothy lands on the Wicked Witch of the East and collects the Silver Shoes (not ruby) and is off to see the Wizard of Oz.  She meets her iconic friends, The Scarecrow, the Tin Man, and the Lion along the way.  They see the Wizard who tells them to kill the Witch of the West, Dorothy accidentally melts her (although she throws the water because she is mad) and then they all go back to the Emerald City.  The three companions get what they already had (their wishes) and Dorothy gets to go home with the aid of the shoes.  It's a classic story that I know I would have liked when I was little.  The characters are very simple, Dorothy is about 10, I think, and it has some good adventures. 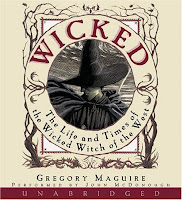 I've read Wicked before, a long time ago.  I remember it being very tedious in the beginning and good after Elphaba gets to Shiz University and meets Glinda.  My memory was right for the most part.  I decided to listen to Wicked this time around instead of reading it.  The thing about audio books is that they are not forgiving of tediousness.  And I forgot how many philosophical questions are apart of Wicked.  And how Gregory Maguire will use 50 words when 5 would do.  So frankly what I probably skimmed over when I read it, I was almost forced to blunder though in the audio.

But it really is a good book.  I like Elphaba's story even if she, herself, is a hard character to like and I feel sympathy for her.  Glinda is what you would expect and the entire thing is a surprise and a very grown-up take on the old childrens classic.  It is full of conspiracy and adultery and death, of political intrigue and oppression and dictators.  My big problems is that I'm always waiting for Dorothy.  But she is such a small part of this story, almost not worth mentioning except for that bucket of water.  But I would read it instead of listen to it.  It's not the narrator's fault.  He does a fine job.  This just does not lend itself to the audio format very well, in my opinion.

As far as how it relates to The Wonderful Wizard of Oz, the events work out closer to the book, with her sending out her familiars, but for different reasons in each book.  There are also a lot of story elements borrowed from the musical too.  The Witch doesn't enter the story until close to the end.  I listened to Wicked before I read Wizard of Oz and kept picturing what I heard in Wicked as I read Wizard.  It's worth it to have both books on hand to do a comparison reading.  It is very interesting how Maguire took a simple children's book and created something as deep as Wicked. 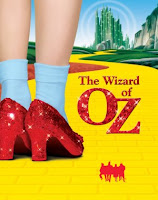 I decided to round this all by re-watching the 1939 musical with Judy Garland.  I haven't seen this movie in so long.  I remember when it would be an event when TBS would play it and we would make cookies to watch it.  Good times.

The music is so great with almost every song being a classic.  "Somewhere Over the Rainbow" is one of my favorites.  Did you know that Shirley Temple was originally offered the role of Dorothy but her studio wouldn't let her go so it went to Judy Garland?  How different this movie would have been.  Temple was actually closer to Dorothy's age, but she wasn't the singer that Garland was.

It is still a beautiful movie.  Everything is so brightly colored and amazing.  The story is changed from the book to be Dorothy's dream instead of really happened like in the book.  So there is a long introduction before the tornado, all done in sepia.  The Witch is in the story more instead of only appearing at the end and the events of the book are condensed.  Still it follows along with the book fairly well and is a good adaption of it.  Of course, I might be a little biased.

Read the Book, See the Movie
Posted by Andrea