This week I should be getting two book tour books in soon, Shadow of the Sun (Kreitzer) and Everlasting (Frazier) so I'll be reading those when I get them.  In the meantime, I'm reading The Clue in the Crumbling Wall (Keene) and This Lullaby (Dessen).  I'm listening to Lord Sunday (Nix, read by Allen Corduner).

Since last week I've read The Secret in the Old Attic (Keene), Beautiful Malice (James), The Demon's Lexicon (Brennan), Anything but Typical (Baskin), Alive and Well in Prague, New York (Grab), and The Wonderful Wizard of Oz (Baum).  I finally finished Wicked (Maguire) and The Year of the Flood (Atwood) on audio.

Other reviews posted:
The Mystery of the Moss-Covered Mansion  (Keene)
The Quest of the Missing Map (Keene)
The Clue in the Jewel Box (Keene)

The More You Ignore Me - Jo Brand
June 1, 2010 US publication
won from Library Thing's Early Reviewers

A hilarious, poignant and darkly comic novel in the tradition of the Adrian Mole novels, full of dysfunctional family life, celebrity obsession, and coming of age in the 80s.

Alice’s family, tucked in a cottage in deepest Herefordshire, England, is a bit weird. Her mother, Gina, is obsessed with the weatherman on the local news and when Gina climbs naked onto the roof with Alice’s pet guinea pig in her arms, she is whisked off to the local psychiatric hospital. Keith, Alice’s father, tries to keep calm, but his patience is severely tested by his in-laws whose disturbed behaviour terrifies the community. Can mother and daughter ever be reconciled? Or is the stage set for more heartbreak than Alice can imagine?

From the Library is my weekly listing of what I checked out from the library recently.
I checked out one audio and then I went crazy and checked out some e-books too.  I don't know how much time I will have to read them, but I figure I can get them again to take on vacation and then I can just bring my Nook and not 5 books. 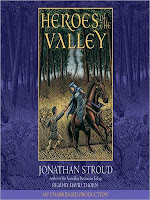 (I am a HUGE fan of Stroud's Bartimaeus trilogy so I thought I'd try one of his other books)
Halli Sveinsson has grown up in the House of Svein, hearing the legends of the heroes as all his forefathers did. Theirs is a peaceful society, where the violence of the past has been outlawed and disputes are settled by the Council.

But young Halli has never quite seemed to fit in with the others. For starters, he is neither handsome nor tall, like his siblings. He’s stumpy and swarthy, with a quick mind and an aptitude for getting into trouble. Bored with everyday chores and sheepherding, he can’t help playing practical jokes on everyone, from Eyjolf, the old servant, to his brother and sister. But when he plays a trick on Ragnar of the House of Hakon, he goes too far, setting in motion a chain of events that will forever alter his destiny. Because of it, Halli will have to leave home and go on a hero’s quest. Along the way, he will encounter highway robbers, terrifying monsters, and a girl who may be as fearless as he is. In the end he will discover the truth about the legends, his family, and himself.

Jonathan Stroud’s stunning new novel is a funny and epic saga, as well as a surprising look at the real meaning of heroism.

Before I Fall (e-book) - Lauren Olivier

(heard good things about the blogosphere)
What if you had only one day to live? What would you do? Who would you kiss? And how far would you go to save your own life?

Samantha Kingston has it all—looks, popularity, the perfect boyfriend. Friday, February 12th should be just another day in her charmed life. Instead, it’s her last. The catch: Samantha still wakes up the next morning. In fact, she re-lives the last day of her life seven times, until she realizes that by making even the slightest changes, she may hold more power than she had ever imagined.

(I feel like I almost read this once.  I'm going to try it again. Also the cover is gorgeous.)
Morgan Sparks and Cam Browne are a match made in heaven. They've been best friends since birth, they tell each other everything, and oh yeah- they're totally hot for each other.

But a week before their joint Sweet Sixteen bash, everything changes. Cam's awkward cousin Pip comes to stay, and Morgan is stunned when her formerly perfect boyfriend seems to be drifting away.

When Morgan demands answers, she's shocked to discover the source of Cam's distance isn't another girl- it's another world. Pip claims that Cam is a fairy. No, seriously. A fairy. And now his people want Cam to return to their world and take his rightful place as Fairy King.

Determined to keep Cam with her, Morgan plots to fool the fairies. But as Cam continues to change, she has to decide once and for all if he really is her destiny, and if their “perfect” love can weather an uncertain future.

(looks cute)
Parker Stanhope has played soccer practically since she could walk. And now that she’s a high school junior, everything she’s worked for is finally coming together. She’s paid her dues on the field, and as an upperclassman, she’s a shoo-in for the varsity team. But that’s not what happens.

This year, Coach Hartley moved up every JV player but two—and one of those two was Parker. Now, she’s stuck with the freshmen, her friends are cutting her loose, and her love of the game is seriously beginning to fail. But Parker is determined to get her life back. She has to get on the varsity team, and she has the perfect plan. All she needs now is the right kind of coach. A kissing coach.

(for the What's in a Name Challenge)
Remy doesn't believe in love. And why should she? Her romance novelist mother is working on her fifth marriage, and her father, a '70s hippie singer, left her with only a one-hit wonder song to remember him by. Every time Remy hears "This Lullaby," it feels like "a bruise that never quite healed right." "Wherever you may go / I will let you down / But this lullaby plays on..." Never without a boyfriend, Remy is a compulsive dater, but before a guy can go all "Ken" on her (as in "ultra boyfriend behavior") she cuts him off, without ever getting close or getting hurt. That's why she's stunned when klutzy, quirky, alterna-band boy Dexter inserts himself into her life and refuses to leave. Remy's been accepted to Stanford, and she plans on having her usual summer fling before tying up the loose ends of her pre-college life and heading for the coast. Except Dexter's not following Remy's tried-and-true rules of break-up protocol. And for the first time, Remy's questioning whether or not she wants him to.

(also looks good.  I've liked Sophie Kinsella in the past.)
Lara Lington has always had an overactive imagination, but suddenly that imagination seems to be in overdrive. Normal professional twenty-something young women don’t get visited by ghosts. Or do they?

When the spirit of Lara’s great-aunt Sadie–a feisty, demanding girl with firm ideas about fashion, love, and the right way to dance–mysteriously appears, she has one last request: Lara must find a missing necklace that had been in Sadie’s possession for more than seventy-five years, and Sadie cannot rest without it. Lara, on the other hand, has a number of ongoing distractions. Her best friend and business partner has run off to Goa, her start-up company is floundering, and she’s just been dumped by the “perfect” man.

Sadie, however, could care less.

Lara and Sadie make a hilarious sparring duo, and at first it seems as though they have nothing in common. But as the mission to find Sadie’s necklace leads to intrigue and a new romance for Lara, these very different “twenties” girls learn some surprising truths from each other along the way. Written with all the irrepressible charm and humor that have made Sophie Kinsella’s books beloved by millions, Twenties Girl is also a deeply moving testament to the transcendent bonds of friendship and family.
Posted by Andrea