My reading has been somewhat scattered lately.  I can't seem to stay on list so I'm sort of fumbling around and grabbing things at random.  So this week I'm going to attempt to read Rampant (Peterfreund) and The Clue in the Diary (Keene).  I'm listening to Fearless Fourteen (Evanovich) and The Maze Runner (Dashner).

Since last week I've finished A Little Princess (Burnett), Truly Madly (Webber), Alice I Have Been (Benjamin), Sister of the Bride (Cleary) and The Sign of the Twisted Candles (audio; Keene).

From the Library is my weekly listing of what I checked out from the library recently.  Most of my holds list is newer fiction so that comes in fairly slow.  Only one book and a few e-audiobooks this time.

(This may end up supplanting one of the others this week.  I would love to read it sooner rather than later.  Jasper Fforde is one of my all time favorite authors.)
Part social satire, part romance, part revolutionary thriller, Shades of Grey tells of a battle against overwhelming odds. In a society where the ability to see the higher end of the color spectrum denotes a better social standing, Eddie Russet belongs to the low-level House of Red and can see his own color—but no other. The sky, the grass, and everything in between are all just shades of grey, and must be colorized by artificial means.

Eddie's world wasn't always like this. There's evidence of a never-discussed disaster and now, many years later, technology is poor, news sporadic, the notion of change abhorrent, and nighttime is terrifying: no one can see in the dark. Everyone abides by a bizarre regime of rules and regulations, a system of merits and demerits, where punishment can result in permanent expulsion.

Eddie, who works for the Color Control Agency, might well have lived out his rose-tinted life without a hitch. But that changes when he becomes smitten with Jane, a Grey Nightseer from the dark, unlit side of the village. She shows Eddie that all is not well with the world he thinks is just and good. Together, they engage in dangerous revolutionary talk.

Stunningly imaginative, very funny, tightly plotted, and with sly satirical digs at our own society, this novel is for those who loved Thursday Next but want to be transported somewhere equally wild, only darker; a world where the black and white of moral standpoints have been reduced to shades of grey.

(Richard Peck writes the kinds of homely stories that I love reading or listening to in this case.)
One of the most adored children’s book characters of all time is the eccentric, forceful, bighearted Grandma Dowdel, star of the Newbery Medal—winning A Year Down Yonder and Newbery Honor—winning A Long Way from Chicago. And it turns out that her story isn’t over–not even close.

It is now 1958, and a new family has moved in next door to Mrs. Dowdel–a family in desperate need of her help (whether they realize it or not). There’s twelve-year-old Bob, shy on courage in a town full of bullies; his Elvis-obsessed older sister, Phyllis, who just might be on the verge of spinning out of control; Bob’s little sister, Ruth Ann, ready and waiting for a larger-than-life role model; and even Bob’s two parents, the young minister and his wife, who are amazed to discover that the last house in town might also be the most vital. As Christmas rolls around, the whole family will realize that they’ve found a true home, and a neighbor with remarkable gifts to share. 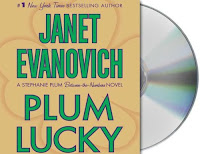 Janet Evanovich is at it again! This time, Diesel makes an appearance just after Valentine’s Day in order to turn Stephanie’s world upside down. Filled with all the characters you know and love from the Burg, including Lula, Grandma Mazur, Connie, Ranger, Joe, Tank, Valerie and Albert Kloughn, Plum Lucky is a can’t-miss bestseller for Janet Evanovich’s legion of fans. 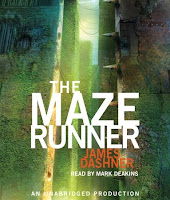 (been hearing about this everywhere it seems)
When Thomas wakes up in the lift, the only thing he can remember is his first name. He has no recollection of his parents, his home, or how he got where he is. His memory is black. But he’s not alone. When the lift’s doors open, Thomas finds himself surrounded by kids who welcome him to the Glade, a large expanse enclosed by stone walls.
Just like Thomas, the Gladers don’t know why or how they got to the Glade. All they know is that every morning, for as long as they could remember, the stone doors to the maze that surrounds them have opened. Every night, they’ve closed tight. Every thirty days a new boy is delivered in the lift. And no one wants to be stuck in the maze after dark.
The Gladers were expecting Thomas’s arrival. But the next day, a girl springs up—the first girl ever to arrive in the Glade. And more surprising yet is the message she delivers. The Gladers have always been convinced that if they can solve the maze that surrounds the Glade, they might be able to find their way home . . . wherever that may be. But it’s looking more and more as if the maze is unsolvable.
And something about the girl’s arrival is starting to make Thomas feel different. Something is telling him that he just might have some answers—if he can only find a way to retrieve the dark secrets locked within his own mind.

(This was a "browsing" choice.)
When Sol and Connie Blink move to Grand Creek, one of the first people to welcome them is an odd older woman, Fay Holaderry, and her friendly dog, Swift, who carries a very strange bone in his mouth. Sol knows a lot more than the average eleven-year-old, so when he identifies the bone as a human femur, he and Connie begin to wonder if their new neighbor is up to no good.
In a spine-tingling adventure that makes them think twice about whom they can trust, Sol
and Connie discover that solving mysteries can be a dangerous game — even for skilled junior sleuths.
Posted by Andrea