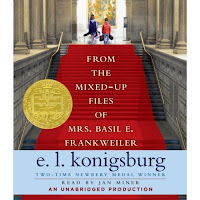 Claudia is tired of living her ordinary life; of having to take care of her brothers and doing her chores.  So she decided to run away to the Metropolitan Museum of Art taking her cheapskate (and "rich") brother, Jamie, with her.  The two have a great time living at the museum when they discover a statue reported to have been carved by the great Michelangelo.  Determined to find out the truth about the statue leads Claudia and Jaime to the original owner, Mrs. Basil E. Frankweiler.

I read this book a lot when I was a kid.  Like a whole lot.  I was always fascinated by the idea of living in a museum and how awesome that would be.  And of course with the mystery of Angel, the Michelangelo statue.  I thought that was so great and I loved Claudia and Jamie and how clever they were.  I still thought that though I realized how annoying Claudia was and Jamie is so funny.  The money exchange was funny because this was written in 1968 when a dime was big money and a quarter was even bigger.  Nothing really new stood out though from child to adult perspective, but it was nice to revisit an old favorite.  I will definitely be adding this to the little man's shelf.

The narrator of the story is Mrs. Frankweiler and it was read by Jan Miner who did an excellent job of giving everyone voices and adding some humor to the reading.

I watched the made-for-TV movie with Lauren Bacall as Mrs. Frankweiler, Jean Marie Barnwell as Claudia and Jesse Lee Soffer as Jamie.  I saw this when it originally aired in 1995, but hadn't thought about it much.

This movie gives Claudia more motivation than the book does for running away.  Her parents are very busy and expect her to pick up the slack and her brothers don't seem to do very much.  So the story stays pretty true to the book; the kids run away and live in the Museum and then the Angel statue comes to the museum and Claudia wants to solve the mystery.  Mrs. Frankweiler appears a few more times in the movie and the parents have a bigger part.  I liked the kids they picked for the parts.  They did a good job with their parts and they were age appropriate.  It is a very cute movie and a good example of turning a book into a movie.
Posted by Andrea