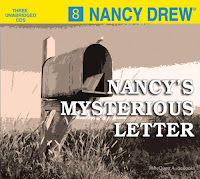 One day I was minding my own business (not likely.  I am a sleuth after all.) when I notice our mailman struggling along.  I invited him to stop at the house for hot cocoa and he accepted.  He is a very nice old man and he is friends with my housekeeper/mother figure Hannah.  While he was at our house, his mail bag was stolen!  Who could do such a thing?  I asked around and found a very reliable source, my 5 year old neighbor, who said it was a man in a yellow coat and hat.  I checked to make sure he didn't have a curious monkey with him.  But it turned out to be the mailman's brother!  There was also a mysterious letter addressed to me from London!  But it turned out to be for a Ms. Nancy Smith Drew and she was to inherit a large sum of money!

Of course, I just had to track her down and through a coincidence that wasn't insane at all, it turned out she was going to be at Emerson College where I happened to be going to see my "special friend" Ned Nickerson play football at the Big Game.  I had a terrible time there what with the almost being run over and being locked in the theater and all, but I'm persistent and found out where the other Nancy was staying.  It turns out she was being conned into marrying the brother so he could get her inheritance!  I jetted off to New York after them, because it is completely plausible that my dad would fund my adventures to stop a total stranger from doing something stupid.   Bess and George came too because, frankly, they have no lives outside of my adventures.  And even though I was drugged and knocked out in the bathroom I still wasn't dissuaded from finding  and stopping the girl and being everyone's favorite girl detective even though I had already forgotten what happened and was thinking about my next mystery, The Sign of the Twisted Candles (now in stores)!

I would also like to say the narrator of this particular adventure was insane and made Hannah southern for no apparent reason and George talked like she was clinching a cigar in her mouth (FYI she usually does because she has SHORT HAIR) and Bess sounded so meek and ridiculous (FYI she is and she is CHUBBY because she has a normal appetite).  Voices are fine but only if they don't sound completely out of character.  I hope she doesn't narrate anymore of my thrilling adventures.

This review is for the Take Another Chance Challenge: Become A Character For this challenge, you can read any book you want. However, you have to write about the book as one of the characters from the book. The character can comment on his/her treatment by the author, other characters, the "untold story," what happened next, and so forth. You could even have two characters interviewing each other! Your imagination is the only limit. Because of the difficulty level of this challenge, it is worth two entries.
Posted by Andrea