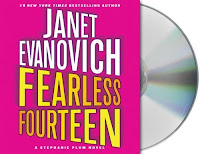 The further madcap adventures of Ms. Stephanie Plum.  This time Stephanie has to deal with a wedding obsessed Lulu, a teenage boy and his missing man, the boy's crazy bank robbing uncle and an aging popstar.

I really enjoyed this one and was surprised by the ending.  It had its usual hijinks of Stephanie and Lulu trying to take down some FTAs but not as many as usual.  This one focused more on Ranger's security detail on the popstar, Brenda, a cross between Britney, Madonna, and Dolly Parton.   Brenda was a great addition since she was so funny and her "stalker" Gary was hilarious.  I love how Stephanie just accepts these people in her life and gives them sandwiches.  That was so great.  It was also funny how Brenda made Ranger nervous.  You just don't get that from Ranger.

Lulu's decision to marry Tank so also a great subplot.  I think it's funny that Tank is scared of Lulu and just lets her go on.  I doubt that they will get married, but it's a fun thing to read.  Grandma Mazer makes many hilarious appearances as does Mooner.  It was a great book and I really thought I knew how it was going to end and I was wrong.  So the predictability went out the window with this one.
Posted by Andrea