From the Library is my (formerly Friday, now) Saturday listing of what I checked out from the library this week.  Mostly audio books and a lot of fractured fairy tales,  I'm in the mood for them.

Fairest (audio) - Gail Carson Levine, read by Sarah Naughton and a full cast (I've actually listen to this before, but it was so good I'm going to revisit it.  I can't imagine reading it since it is full of song and it is so beautiful to hear them sung.) 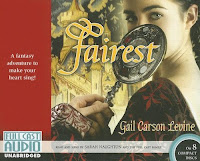 In the kingdom of Ayortha, who is the fairest of them all? Certainly not Aza. She is thoroughly convinced that she is ugly. What she may lack in looks, though, she makes up for with a kind heart, and with something no one else has–a magical voice. Her vocal talents captivate all who hear them, and in Ontio Castle they attract the attention of a handsome prince – and a dangerous new queen. In this masterful novel filled with humour, adventure, romance, and song, Newbery Honor author Gail Carson Levine invites you to join Aza as she discovers how exquisite she truly is.

L.A. Candy - Lauren Conrad (Don't judge me.  Although I think this is going to turn out like that time I read Pamela Anderson's book, I'm going to read it anyway. P.S. I've only watched The Hills like twice.)

Los Angeles is all about the sweet life: hot clubs, cute guys, designer . . . everything. Nineteen-year-old Jane Roberts can't wait to start living it up. She may be in L.A. for an internship, but Jane plans to play as hard as she works, and has enlisted her BFF Scarlett to join in the fun.
When Jane and Scarlett are approached by a producer who wants them to be on his new series, a "reality version of Sex and the City," they can hardly believe their luck. Their own show? Yes, please!
Soon Jane is TV's hottest star. Fame brings more than she ever imagined possible for a girl from Santa Barbara—free designer clothes, the choicest tables at the most exclusive clubs, invites to Hollywood premieres—and she's lapping up the VIP treatment with her eclectic entourage of new pals. But those same friends who are always up for a wild night are also out for a piece of Jane's spotlight.
In a city filled with people chasing after their dreams, it's not long before Jane wakes up to the reality that everyone wants something from her, and nothing is what it seems to be.
L.A. Candy is a deliciously entertaining novel about what it's like to come of age in Hollywood while starring in a reality TV show, written by a girl who has experienced it all firsthand: Lauren Conrad.

Warning: this description has not been authorized by Pseudonymous Bosch. As much as he'd love to sing the praises of his book (he is very vain), he wouldn't want you to hear about his brave 11-year old heroes, Cass and Max-Ernest. Or about how a mysterious box of vials, the Symphony of Smells, sends them on the trail of a magician who has vanished under strange (and stinky) circumstances. And he certainly wouldn't want you to know about the hair-raising adventures that follow and the nefarious villains they face. You see, not only is the name of this book secret, the story inside is, too. For it concerns a secret. A Big Secret.

Once Upon a Marigold (audio) - Jean Farris, read by Carrington McDuffie  (my fairy tale kick) Christian is gaga for Princess Marigold. But he's just a commoner, and no match for royalty. Heck, he lives in a cave with a troll! And now he's discovered another reason to put his love-soggy heart on ice: Queen Olympia is scheming to take over the kingdom--and she'll bump off her own daughter to do it. Can Christian foil her diabolical plans?

Not only is Christian discovering things about Olympia but also about himself. It is these secrets that let him be with Princess Marigold.


Oryx and Crake (audio) - Margaret Atwood, read by Campbell Scott (I have no idea how I ended up with this, but the only thing I 've ever read by Atwood is the Handmaid's Tale so I guess I'll try so more.) 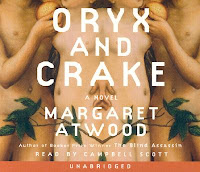 In Oryx and Crake, a science fiction novel that is more Swift than Heinlein, more cautionary tale than "fictional science" (no flying cars here), Margaret Atwood depicts a near-future world that turns from the merely horrible to the horrific, from a fool's paradise to a bio-wasteland. Snowman (a man once known as Jimmy) sleeps in a tree and just might be the only human left on our devastated planet. He is not entirely alone, however, as he considers himself the shepherd of a group of experimental, human-like creatures called the Children of Crake. As he scavenges and tends to his insect bites, Snowman recalls in flashbacks how the world fell apart. While the story begins with a rather ponderous set-up of what has become a clichéd landscape of the human endgame, littered with smashed computers and abandoned buildings, it takes on life when Snowman recalls his boyhood meeting with his best friend Crake: "Crake had a thing about him even then.... He generated awe ... in his dark laconic clothing." A dangerous genius, Crake is the book's most intriguing character. Crake and Jimmy live with all the other smart, rich people in the Compounds--gated company towns owned by biotech corporations. (Ordinary folks are kept outside the gates in the chaotic "pleeblands.") Meanwhile, beautiful Oryx, raised as a child prostitute in Southeast Asia, finds her way to the West and meets Crake and Jimmy, setting up an inevitable love triangle. Eventually Crake's experiments in bioengineering cause humanity's shockingly quick demise (with uncanny echoes of SARS, ebola, and mad cow disease), leaving Snowman to try to pick up the pieces.

Once upon a time, there lived a king whose heart was heavy. He had been betrayed by the woman he loved. Though the queen's schemes were discovered before she could deprive her husband of his life, her dying curse killed something deep within him: his ability to love and trust.

And so he makes a terrible resolution: He will take a bride for one night only. In the morning she will face a horrible fate. Then he will choose another. Nothing can change his course, until one brave woman steps forward. Shahrazad, the Storyteller's Daughter.
Steeped in the ancient art of her mother's people, Shahrazad embarks upon a perilous course. With words alone, she will seek to restore the king's heart. As she tells her tales a bond forms between them that neither can deny. But will it be strong enough to hold them together when unexpected danger erupts?

Twelve Sharp (audio) - Janet Evanovich, read by Lorelei King (for the Stephanie Plum challenge I will planning on a read and listen.) 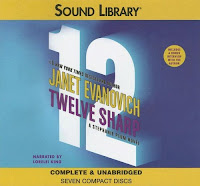 Welcome to Trenton, New Jersey, where bounty hunter Stephanie Plums life is about to implode. FIRST A STRANGER APPEARS While chasing down the usual cast of miscreants and weirdos Stephanie discovers that a crazed woman is stalking her. THEN THE STRANGER REVEALS HER SECRETS The woman dresses in black, carries a 9mm Glock, and has a bad attitude and a mysterious connection to dark and dangerous Carlos Manoso....street name, Ranger. NEXT, SOMEBODY DIES The action turns deadly serious, and Stephanie goes from hunting skips to hunting a murderer. SOON, THE CHASE IS ON Ranger needs Stephanie for more reasons than he can say. And now, the two are working together to find a killer, rescue a missing child, and stop a lunatic from raising the body count. When Stephanie Plum and Ranger get too close for comfort, vice cop Joe Morelli (her on-again, off-again boyfriend) steps in. Will the ticking clock stop at the stroke of twelve, or will a stranger in the wind find a way to stop Stephanie Plum....forever?

The Wish (audio) - Gail Carson Levine, read by Ariadne Meyers  (I've liked everything I've read or listen to by Levine and this sounds cute.) 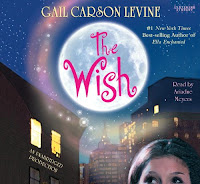 Ah, the ancient mysteries of life. Why are the popular people popular? What's different about them--what makes them special? In The Wish, award-winning author Gail Carson Levine (Ella Enchanted, Dave at Night) explores the age-old question with a simple premise: a girl who is granted one wish by an old lady on the subway wishes to be "the most popular kid at Claverford." As is the fate of many who are granted only one wish, Wilma doesn't think through her wish carefully enough. While she is now adored by boys and girls alike, she is a mere three weeks away from graduating from Claverford. At Elliott, her next school, she'll be back to her lowly, oft-ridiculed self. Tension builds for Wilma until her graduation-night dance, the night before her popularity--and maybe even her relationship with her wonderful new boyfriend--will invariably come to a screeching halt. This fun, witty, insightful novel thoroughly examines the nature of "popularity," and what it means to be true to yourself. It's not just because of the old woman's spell that Wilma ponders, "'To thine own self be true.' But who was mine own self? That's what I wanted to know." Wilma is a funny, smart, no-more-awkward-than-most character with whom young readers of all social echelons will identify completely. When her popularity runs out (and the spell does end), her true friendships remain, and she's left standing on her feet.

Ophelia - Lisa M. Klein (for the Much Ado about Shakespeare Challenge, I have always loved Ophelia for some reason)

Ophelia is young, vivacious, and falling in love with a prince who cannot return her affections without arousing suspicion. And so they meet in secret—embracing in stairwells and castle turrets, reaching passionately for each other under the cover of darkness. His name is Hamlet; her name is Ophelia. And if you think you know this story, think again. Because when bloody deeds turn the court of Elsinore into a place of treachery and madness, Ophelia alone will find the means to escape, with nothing more than the clothes on her back…and one very dangerous secret.