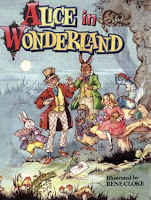 I can't remember the last time I read Alice in Wonderland.  It is a strange book because basically Alice wanders around Wonderland just running into these odd characters.  Mostly she is looking for the beautiful garden she sees through the keyhole, but has trouble finding it.  She meets the White Rabbit, the Caterpillar, the Duchess, the Mad Hatter and the March Hare, the Queen of Hearts, the Mock Turtle and the Gryphon, and attends the trial of the Knave of Hearts.  Alice is a very curious and proper sort of girl and there's a lot of manners commentary and poetry recitation.  It's still a fun book and one of my favorites.
Favorite quote: the whole book is one giant favorite quote, but I especially liked this time:


"Begin at the beginning," the King [of Hearts] said gravely, "and go on till you come to the end; then stop."

The second half of the book isn't really a sequel.  It's more a companion books since Alice doesn't go back to Wonderland, but rather Looking Glass World.  This story has a little more direction since Alice is playing the part of a White Pawn in a great chess game.  When she arrives in Looking Glass World, she meets the Red Queen and is made apart of the game.  When she reaches the eighth square, then Alice will be made into a Queen.  Carroll even sets out the moves at the beginning of the book so they can be played out by the reader.


"Always speak the truth - think before you speak - and write it down afterward." p.283


Of the two books, Through the Looking Glass is my favorite.  I always liked the idea of the chess game and most of the characters are familiar as they are either in the Disney movie or are nursery rhyme characters. In this story, Alice meets the talking flowers, the Red and White Queens and Kings, Tweedledum and Tweedledee, Humpty Dumpty, the Lion and the Unicorn, and the White Knight.  Although my two favorite characters are in Wonderland, the Caterpillar and the Cheshire Cat, I have always like the White Queen.  She is amusing and nice and I like how she lives backwards.  Everyone is odd, of course, and wants to recite poetry to Alice, so much so that she gets tired of it.  At the end at Alice's party, there is a joke about meeting the mutton that reminds me of The Restaurant at the End of the Universe "Let's meet the meat."  I wonder if Douglas Adams was influenced by this book.  Anyway,  it was nice to revisit one of my old favorites and if you never read either, I recommend that you start reading right now.  After all, all ways here are my ways. ;)
Posted by Andrea