From the Library is my (formerly Friday, now)Saturday listing of what I checked out from the library this week.


Everlost (audio) - Neil Shusterman, read by Nick Podehl (been hearing a lot about Shusterman lately so I thought I'd start here)

Nick and Allie don't survive the car accident...but their souls don't exactly get where they're supposed to get either. Instead, they're caught halfway between life and death, in a sort of limbo known as Everlost: a shadow of the living world, filled with all the things and places that no longer exist. It's a magical yet dangerous place where bands of lost children run wild and anyone who stands in the same place too long sinks to the center of the Earth.
When they find Mary, the self-proclaimed queen of lost kids, Nick feels like he he's found a home. But Allie isn't satisfied spending eternity between worlds. Against all warnings, Allie begins learning the "Criminal Art" of haunting and ventures into dangerous territory, where a monster called the McGill threatens all the souls of Everlost.

Life as We Knew It (audio) Susan Beth Pfeffer, read by Emily Bauer (Jill at the O.W.L. reviewed this recently and it looked good) 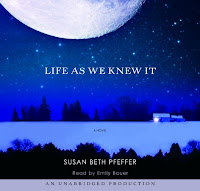 It's almost the end of Miranda's sophomore year in high school, and her journal reflects the busy life of a typical teenager: conversations with friends, fights with mom, and fervent hopes for a driver's license. When Miranda first begins hearing the reports of a meteor on a collision course with the moon, it hardly seems worth a mention in her diary. But after the meteor hits, pushing the moon off its axis and causing worldwide earthquakes, tsunamis, and volcanoes, all the things Miranda used to take for granted begin to disappear. Food and gas shortages, along with extreme weather changes, come to her small Pennsylvania town; and Miranda's voice is by turns petulant, angry, and finally resigned, as her family is forced to make tough choices while they consider their increasingly limited options. Yet even as suspicious neighbors stockpile food in anticipation of a looming winter without heat or electricity, Miranda knows that that her future is still hers to decide even if life as she knew it is over.

The Dead and the Gone - Susan Beth Pfeffer (sequel to Life as We Knew It.  I like to have all the books if possible.)

Susan Beth Pfeffer’s Life as We Knew It enthralled and devastated readers with its brutal but hopeful look at an apocalyptic event--an asteroid hitting the moon, setting off a tailspin of horrific climate changes. Now this harrowing companion novel examines the same events as they unfold in New York City, revealed through the eyes of seventeen-year-old Puerto Rican Alex Morales. When Alex's parents disappear in the aftermath of tidal waves, he must care for his two younger sisters, even as Manhattan becomes a deadly wasteland, and food and aid dwindle.     With haunting themes of family, faith, personal change, and courage, this powerful new novel explores how a young man takes on unimaginable responsibilities.

The Midnight Twins - Jacquelyn Mitchard (My sister mentioned this book and it sounds cool.)

Meredith and Mallory Brynn, are mirror twins born on either side of midnight one New Year's Eve. They have always been inseparable. But after they are nearly killed in a mysterious fire on their thirteenth birthday, the bond that has always joined them unravels. They begin to have visions and dreams that reveal the deep secrets kept by the people around them. Meredith and Mallory realize they have each been given a gift: Mallory can see deep into the past, Meredith can see the future. But when they discover that one boy is not what they imagined, their lives will be changed forever. If they can survive…


Wings - Aprilynne Pike (I don't remember where I heard about this first, but it is being made into a movie with Miley Cyrus so, of course, I needed to read it before that happened.)

Laurel was mesmerized, staring at the pale things with wide eyes. They were terrifyingly beautiful—too beautiful for words.
Laurel turned to the mirror again, her eyes on the hovering petals that floated beside her head. They looked almost like wings.
In this extraordinary tale of magic and intrigue, romance and danger, everything you thought you knew about faeries will be changed forever.
Posted by Andrea