From the Library is my Friday listing of what I checked out from the library this week.  I'm including movies this week if they pertain to any challenges.

The Messenger (audio) - written by Lois Lowry, read by David Morse (I hear that my questions will be answered.  This better be true.) 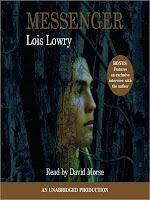 For the past six years, Matty has lived in Village and flourished under the guidance of Seer, a blind man, known for his special sight. Village was a place that welcomed newcomers, but something sinister has seeped into Village and the people have voted to close it to outsiders. Matty has been invaluable as a messenger. Now he must make one last journey through the treacherous forest with his only weapon, a power he unexpectedly discovers within himself.


The Taming of the Shrew (audio) - written by William Shakespare, read by full cast (for Much Ado Challenge, I've never read the play shockingly) 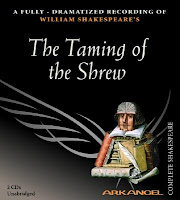 The main plot depicts the courtship of Petruchio, a gentleman of Verona, and Katherina, the headstrong, obdurate, and eponymous shrew. Initially, Katherina is an unwilling participant in the relationship, but Petruchio tempers her with various psychological torments - the "taming" - until she is an obedient bride. The sub-plot features a competition between the suitors of Katherina's less intractable sister, Bianca.

Disney's song-filled, animated retelling of Lewis Carroll's whimsical tale follows young Alice as she explores the strange and wonderful world she's hurled into after falling down a rabbit hole. Nominated for an Academy Award for Best Score, this family classic features the voices of Kathryn Beaumont, Ed Wynn and Sterling Holloway and boasts and usual cast of wacky characters, including the Mad Hatter, the March Hare, the Cheshire Cat and more.


Alice Through the Looking Glass - Kate Beckinsale (1998) (I saw part of this once when I was feverish and swore I dreamed it until I found out I didn't.)

Once upon a time, Alice traveled to Wonderland. Now, she takes another journey and meets up with Tweedledum and Tweedledee, Humpty Dumpty, the Red King and Queen, Red and White Knights and Jabberwocky. Join the intrepid Alice on an enchanting magical adventure that will delight the whole family.


10 Things I Hate about You - (1999) (I have, of course, seen this movie and frankly it's one of the best, but I don't own it for unknown reasons and I'm going to do an original play/movie comparison for Much Ado.)

Email ThisBlogThis!Share to TwitterShare to FacebookShare to Pinterest
Labels: audio books, From the Library, movies