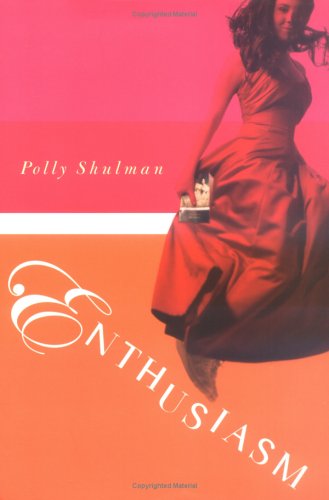 Julie's best friend, Ashleigh, is an enthusiast. She falls in love with something and it becomes her obsession. Julie usually just goes along with Ashleigh. But when Ashleigh decides that Pride and Prejudice is her new thing, Julie is horrified. Pride and Prejudice and Jane Austen is her thing. But it's when Ashleigh decides that Julie's secret crush is her Mr. Darcy, that Julie begins to see the trouble of dealing with an enthusiast.

I picked this one hoping it would be like a YA Pride and Prejudice, but it wasn't. This isn't a bad thing, but it was different than I expected. The book is told in a very Austen-like manner and the influence was definitely there. The beginning was very P&P, the middle was more A Midsummer Night's Dream, and then back to P&P.

Julie is a very good friend and puts up with her friend Ashleigh's notions and in general just goes along with her. Ashleigh is one of those people that decided they love something and jumped all the way in. Now she's decided she loves Jane Austen and wants to dress, talk, and behave the same way as the characters in Pride and Prejudice. Julie is not happy about this but goes along with her since Ashleigh can't be talk out of anything. In the course of this, Julie and Ashleigh end up at a dance for the boys school in their town and meet C. Grandison Parr and his friend Ned. Parr happens to be the boy that Julie has had several chance run-ins with in town and on whom she harbors a secret crush. Ashleigh decides that Parr is her Mr. Darcy and Ned is Julie's Bingley and nothing Julie says will convince her otherwise. Consequently I want to shake them both. I literally turned the book off at several points and shouted (in my car) at Julie for being stupid and at Ashleigh for not listening. Julie, in particular, was very obtuse and couldn't see the signs that Parr liked her even if they were written in neon. But then I thought back to when I was 16 and realized that I was that stupid at times too. I can think of at least 2 boys that liked me back then and I didn't realize it at all and looking back it is clear as day. But I was so sure that it couldn't be possible that I convinced myself it wasn't possible and I was too self-conscious to realize it. I could smack 16 year old me sometimes (because, frankly, you should have seen one of those boys, phew). Just like I wanted to smack Julie for being dumb and Ashleigh for not being a listener.

There were some very nice themes of loyalty and friendship between the girls and that was refreshing for a YA book. It seems lately there are a lot with back biting and meanness and this was a nice return to a classic friendship theme. It was also nice to see a romance develop that was given some time to blossom. That was refreshing too. It was obvious how it was going to end given the Austen-influence but it was a sweet book so that was okay.

I listened to it on CD and I liked the narrator, Jennifer Ikeda. She sounded very Austen-like. Her tone and pacing was very good.
Posted by Andrea