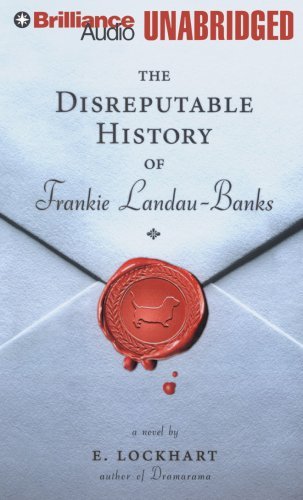 Frankie attends Alabaster Preparatory, an elite school for both old and new money alike. She begins dating Matthew Livingston, one of the most popular senior boys, her sophomore year. Matthew is a member of the school's most secret male society and Frankie wants in. Underestimated by the boys and tired of being "adorable," she makes it her mission to become the brains behind the brawn.

I've now read everything by E. Lockhart with the exception of Fly on the Wall. And I've enjoyed everything I've read. She writes such smart, witty, and real girls. Frankie is an amazing girl even I felt like smacking her now and then. She lives in a world of privilege but doesn't want to accept the status quo and won't let herself become regulate to being one of the girlfriends or just a cute girl. She wants to be powerful and recognized for her intelligence. I admire the way she went about getting what she wanted and recognize that ambition in myself. Not to the point of Frankie, but still that need to be the one in charge, to be the controller. The boys I recognize from school and from friends, boys who just are without needing to try. The way they effortlessly exist while the girls have to watch what they say or how they act lest someone assign a label to them. I think that is what Frankie is looking for, to be herself without being labeled.

Tanya Eby is the narrator and she does an excellent job. At first I thought that she read too quickly, but later realized it was tailored to the scence. Her voice is pleasant and she makes everything Frankie does seem natural and intelligent.
Posted by Andrea