Another Kind of Cowboy 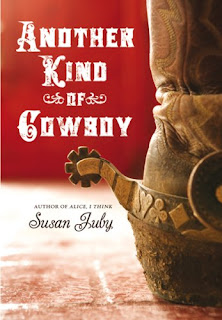 Alex is gay and he knows this but no one else does. Alex loves horses and he is good with them and has a lot of natural talent. He rides Western-style to please his father but really wants to ride dressage, loving the precision and style of it. Alex is afraid to tell his father about both his sexuality and the dressage. He is a very introverted boy, afraid of doing the wrong thing, that people will think the wrong thing about him. His family is very dysfunctional. His mother left their family and his father lives in an RV in the driveway and is drunk about 95% of the time. His aunt lives in the house with him and his twin ninja-wannabe sisters. Finally when Alex meet Cleo O'Shea he is able to come out of his shell (pun intended) and realize that life is not about hiding what you are.

Cleo O'Shea accidentally let her parent's house get robbed. Since they are never around, they send to an equestrienne boarding school. She is a spoiled rich girl who is one of those girls that just assumes people like her or want to hang out with her. She has no concept of earning anything. But she has parents that don't pay any attention to her unless she is doing something negative. Without any direction in life, she falls easilty into the party girl mode. But when she meets Alex Ford, she realizes that sometimes you have to work for the good things in life.

I've had this book for a long time. I just had it. I didn't really know what it was about. It was by Susan Juby and so I figured it had to be good. (Read Alice, I Think) But when I was looking up books for the GLBT Challenge, this one was recommended and I was like Hey I own that, etc.

It was really good. So good that I wished I had read it earlier good but then I couldn't have used it for this challenge good. So good that I was a little teary (in a good way) at the end good. It was told from first person perspective on Cleo's part and third person on Alex's part. I'm not sure why. But it worked. Alex and Cleo are an odd pairing but in the end they help each other realize what is missing from their lives. There's a lot of horse talk but it's not overwhelming. If nothing else, it makes you want to look up dressage. That is some amazing stuff.
Posted by Andrea