Bride and Prejudice (Based on a Book) 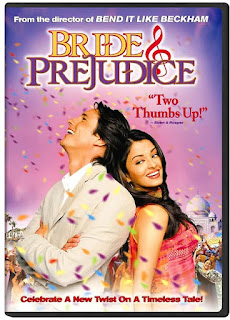 In this Bollywood-style adaptation of Pride and Prejudice, Lalita Bakshi meets William Darcy at a friend's wedding in her hometown in India. Darcy is uncomfortable and insulting and she does not like him. But his friend, Mr. Balraj, takes to her older sister, Jaya, and the two begin to fall in love. On a trip, Lalita meets Johnny Wickham and the two become very close while her younger sister Lakhi develops a crush on him.
Meanwhile, a distant cousin, Mr. Kholi, arrives with the hope of finding a wife among Lalita and her sisters. When he is rejected he marries her friend, Chandra Lamba. Darcy and Lalita become close when she goes to LA to visit Chandra, but rejects his proposal based on his attitude and treatment of her sister. But when Lakhi runs off with Wickham, Darcy comes to her aid and Lalita realizes that first impression are not always the best.

Ya'll I have to say how much I love this movie. It is such a beautiful colorful movie and Aishwarya Rai, who plays Lalita (the Elizabeth character) is so so beautiful. And Martin Henderson is a good foot-in-the-mouth Darcy. And Naveen Andrews (Sayid!!!!) is the Bingley character. My love for him knows no bounds and, since it has been so long since I have seen this movie, I didn't realize he was in it.

It is a very clever movie though. The characters are transformed perfectly from English to Indian and I love how they managed to modernize it and keep it traditionally at the same time. It is a little startling when they randomly burst into song especially the dancing in the first major scene. But it is awesome and the music is incredible. This is a complete music see movie. I highly recommend it!

*for the Everything Austen Challenge
Posted by Andrea

Email ThisBlogThis!Share to TwitterShare to FacebookShare to Pinterest
Labels: based on a book, Jane Austen, movies, reviews