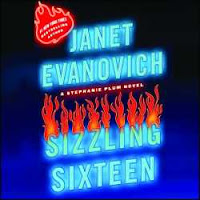 In the sixteenth installment of Stephanie Plum, she is looking for Vinnie after he is kidnapped for some gambling debts.

I never get bored with Stephanie Plum and her mishaps as the worst, most ineffectual bounty hunter.  Mostly because they just plain make me laugh.  Though there was a bit of forward movement in this book so I think it might get the characters out of the rut that they have been in for quite a few books now.  And Stephanie seems to be getting closer to a decision between Morelli and Ranger.

This was different too because Vinnie was featured a bit more.  I hope he is featured a bit less from now on because he is really annoying and I didn't like the narrator's voice for him (though it fits).  But Vinnie gets in trouble with the local mob who is in a war with someone much more dangerous and Vinnie has become a target.  So Stephanie decides to rescue him with hilarious results and a little bit of underhandedness.  Lulu is still one of my favorite characters and it was nice to see more of Connie.

Lorelei King is the narrator for this series and I enjoy listening to her voice.  She has become Stephanie Plum to me and I love her other voices for the characters.  She really makes them distinct and fitting for each one.  She has a soothing voice for the narration bits of the book and is never over the top.