This week I'm reading Brilliant (Kellogg) and The Grimm Legacy (Shulman).  On audio, I'm finishing The Ring of Solomon (Stroud) and then listening to Linger (Stiefvater). 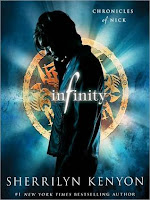 At fourteen, Nick Gautier thinks he knows everything about the world around him. Streetwise, tough and savvy, his quick sarcasm is the stuff of legends. . .until the night when his best friends try to kill him. Saved by a mysterious warrior who has more fighting skills than Chuck Norris, Nick is sucked into the realm of the Dark-Hunters: immortal vampire slayers who risk everything to save humanity.

Nick quickly learns that the human world is only a veil for a much larger and more dangerous one: a world where the captain of the football team is a werewolf and the girl he has a crush on goes out at night to stake the undead.

But before he can even learn the rules of this new world, his fellow students are turning into flesh eating zombies. And he's next on the menu.

As if starting high school isn't hard enough. . .now Nick has to hide his new friends from his mom, his chainsaw from the principal, and keep the zombies and the demon Simi from eating his brains, all without getting grounded or suspended. How in the world is he supposed to do that?

The Lover's Dictionary by David Levithan

If the moment doesn’t pass, that’s it—you’re done. And if the moment does pass, it never goes that far. It stands in the distance, ready for whenever you want it back. Sometimes it’s even there when you thought you were searching for something else, like an escape route, or your lover’s face.

How does one talk about love? Do we even have the right words to describe something that can be both utterly mundane and completely transcendent, pulling us out of our everyday lives and making us feel a part of something greater than ourselves? Taking a unique approach to this problem, the nameless narrator of David Levithan’s The Lover’s Dictionary has constructed the story of his relationship as a dictionary. Through these short entries, he provides an intimate window into the great events and quotidian trifles of being within a couple, giving us an indelible and deeply moving portrait of love in our time

Email ThisBlogThis!Share to TwitterShare to FacebookShare to Pinterest
Labels: From the Library, holidays, weekly round-up