This week I'm reading Savannah Grey (McNish) and I'm listening to The Ring of Solomon (Stroud). 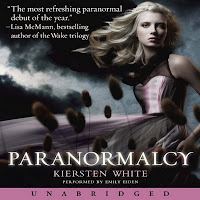 Weird as it is working for the International Paranormal Containment Agency, Evie's always thought of herself as normal. Sure, her best friend is a mermaid, her ex-boyfriend is a faerie, she’s falling for a shape-shifter, and she’s the only person who can see through paranormals' glamours, but still. Normal.

Only now paranormals are dying, and Evie's dreams are filled with haunting voices and mysterious prophecies. She soon realizes that there may be a link between her abilities and the sudden rash of deaths. Not only that, but she may very well be at the center of a dark faerie prophecy promising destruction to all paranormal creatures. 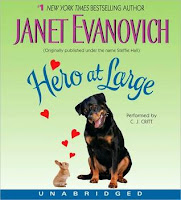 It's about a sexy guy who cooks a potholder in spaghetti sauce and charms a single mom and former world-class ice skater with the promise of a ride on his Zamboni. It's got broken bones, giant turkeys, cantankerous cars, and Aunt Edna 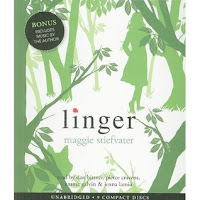 In Maggie Stiefvater's Shiver, Grace and Sam found each other. Now, in Linger, they must fight to be together. For Grace, this means defying her parents and keeping a very dangerous secret about her own well-being. For Sam, this means grappling with his werewolf past . . . and figuring out a way to survive into the future. Add into the mix a new wolf named Cole, whose own past has the potential to destroy the whole pack. And Isabelle, who already lost her brother to the wolves . . . and is nonetheless drawn to Cole.

Ruby Oliver, the neurotic, hyperverbal heroine of the The Boyfriend List, The Boy Book, and The Treasure Map of Boys, is back!
Ruby Oliver is in love. Or it would be love, if Noel, her real live boyfriend, would call her back. But Noel seems to have turned into a pod-robot lobotomy patient, and Ruby can’t figure out why.
Not only is her romantic life a shambles:
Her dad is eating nothing but Cheetos,
Her mother’s got a piglet head in the refrigerator,
Hutch has gone to Paris to play baguette air guitar,
Gideon shows up shirtless,
And the pygmy goat Robespierre is no help whatsoever.
Will Ruby ever control her panic attacks?
Will she ever understand boys?
Will she ever stop making lists?
(No to that last one.)
Roo has lost most of her friends. She’s lost her true love, more than once. She’s lost her grandmother, her job, her reputation, and possibly her mind. But she’s never lost her sense of humor. The Ruby Oliver books are the record of her survival.

The Unwritten Rule by Elizabeth Scott

Sarah and Brianna have always been friends, and it's always gone like this: guys talk to Sarah in order to get closer to Brianna. So even though Sarah met Ryan first, she's not surprised that he ends up with Brianna (even though Sarah has a massive crush on him). The three of them hang out, and Sarah and Ryan's friendship grows until one night an innocent exchange between them leads to a moment that makes Sarah realize that Ryan might be interested in her after all. But if there's one unwritten rule, it's this: you don't mess around with a friend's boyfriend. So Sarah tries to resist temptation. But with the three of them thrown together more and more, tension builds between Sarah and Ryan, and when they find themselves alone together at one point, they realize they just can't fight how they feel anymore...

The Grimm Legacy by Polly Shulman

Elizabeth has a new job at an unusual library— a lending library of objects, not books. In a secret room in the basement lies the Grimm Collection. That's where the librarians lock away powerful items straight out of the Brothers Grimm fairy tales: seven-league boots, a table that produces a feast at the blink of an eye, Snow White's stepmother's sinister mirror that talks in riddles. When the magical objects start to disappear, Elizabeth embarks on a dangerous quest to catch the thief before she can be accused of the crime—or captured by the thief.
Polly Shulman has created a contemporary fantasy with a fascinating setting and premise, starring an ordinary girl whose after-school job is far from ordinary— and leads to a world of excitement, romance and magical intrigue.

Something, Maybe by Elizabeth Scott

Everyone thinks their parents are embarrassing, but Hannah knows she's got them all beat.
Her dad made a fortune showcasing photos of pretty girls and his party lifestyle all over the Internet, and her mom was once one of her dad's 'girlfriends' and is now the star of her own website.
After getting the wrong kind of attention for way too long, Hannah has mastered the art of staying under the radar . . . and that's just how she likes it. Of course, that doesn't help her get noticed by her crush. Hannah's sure that gorgeous, sensitive Josh is her soul mate. But trying to get him to notice her; wondering why she suddenly can't stop thinking about another guy, Finn; and dealing with her parents make Hannah feel like she's going crazy. Yet she's determined to make things work out the way she wants only what she wants may not be what she needs. . . .
Once again, Elizabeth Scott has created a world so painfully funny and a cast of characters so heartbreakingly real that you'll love being a part of it from unexpected start to triumphant finish.

Meet Kick Keswick, an elegant and self-possessed American who has been at London's venerable Ballantine amp; Company Auctioneers for over thirty years. She is an expert on paintings, furniture, and objets d'art, and so far has lived a perfectly happy life with things on her mind other than love. In fact, Kick rarely lets anyone into her private world. She prefers it that way. Kick doesn't need a man in her life, messing things up. But when American industrialist, scoundrel, and womanizer Owen Brace grabs the faltering Ballantine amp; Company in a corporate takeover, he turns Kick's world upside down, opening her eyes to large-scale love, romance, and sensuous pleasure. But something tells Kick that Brace's motives are anything but sincere. And when he gets near enough to threaten Kick's closely guarded life, Brace learns the dangers of underestimating this woman. From sophisticated London to cozy Provence, France, Brilliant is a playfully delicious novel of suspense, masterful revenge, and secrets of the multi-faceted kind....