This week I am reading Perfect (Kellogg) and Bleeding Violet (Reeves).  I'll finishing listening to The Lost Hero (Riordian) and start A Crooked Kind of Perfect (Urban) next.

Last week I read Withering Tights (Rennison) and didn't post any reviews.  I'm trying this whole taking my time and reviewing as I go thing now.

Isabelle Lee has a problem, and it's not just Ape Face, her sister, or group therapy for an eating disorder, or even that her father died and her mother is depressed and in denial. It's that Ashley, the most popular girl in school, is inviting Isabelle to join her at lunch and at sleepovers at her house, and this is presenting Isabelle with a dilemma. Pretty Ashley has moved Isabelle up the social ladder, but is it worth keeping the secret they share? Caught in the orbit of popularity and appearances, Isabelle must navigate a world with mixed messages, false hopes, and potentially harmful turns, while coping with her own flailing family and emotions. The author brings a depth of characterization, humor, and a real adolescent's voice to this multileveled story about the desire to be perfect in an imperfect world.

Ethan Wate used to think of Gatlin, the small Southern town he had always called home, as a place where nothing ever changed. Then he met mysterious newcomer Lena Duchannes, who revealed a secret world that had been hidden in plain sight all along. A Gatlin that harbored ancient secrets beneath its moss-covered oaks and cracked sidewalks. A Gatlin where a curse has marked Lena's family of powerful Supernaturals for generations. A Gatlin where impossible, magical, life-altering events happen.
Sometimes life-ending.
Together they can face anything Gatlin throws at them, but after suffering a tragic loss, Lena starts to pull away, keeping secrets that test their relationship. And now that Ethan's eyes have been opened to the darker side of Gatlin, there's no going back. Haunted by strange visions only he can see, Ethan is pulled deeper into his town's tangled history and finds himself caught up in the dangerous network of underground passageways endlessly crisscrossing the South, where nothing is as it seems. 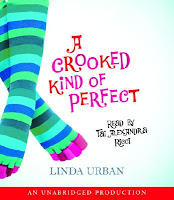 Ten-year-old Zoe Elias dreams of playing a baby grand piano at Carnegie Hall. But when Dad ventures to the music store and ends up with a wheezy organ instead of a piano, Zoe's dreams hit a sour note. Learning the organ versions of old TV theme songs just isn't the same as mastering Beethoven on the piano. And the organ isn't the only part of Zoe's life that's off-kilter, what with Mom constantly at work, Dad afraid to leave the house, and that odd boy, Wheeler Diggs, following her home from school every day. Yet when Zoe enters the annual Perform-O-Rama organ competition, she finds that life is full of surprises—and that perfection may be even better when it's just a little off center.

Love can be a dangerous thing....
Hanna simply wants to be loved. With a head plagued by hallucinations, a medicine cabinet full of pills, and a closet stuffed with frilly, violet dresses, Hanna's tired of being the outcast, the weird girl, the freak. So she runs away to Portero, Texas in search of a new home.
But Portero is a stranger town than Hanna expects. As she tries to make a place for herself, she discovers dark secrets that would terrify any normal soul. Good thing for Hanna, she's far from normal. As this crazy girl meets an even crazier town, only two things are certain: Anything can happen and no one is safe