This week I'm reading Once in a Full Moon (Schreiber) and maybe Slice of Cherry (Reeves). I'm listening to The Lost Hero (Riordan).

Last week I read Confessions of the Sullivan Sisters (Staniford) and Illyria (Hand) and I finished listening to The Incorrigible Children of Ashton Place (Wood) on audio.

I'm a little frightened based on the reviews but I'm going to try it.  The cover is amazing.

Kit and Fancy Cordelle are sisters of the best kind: best friends, best confidantes, and best accomplices. The daughters of the infamous Bonesaw Killer, Kit and Fancy are used to feeling like outsiders, and that’s just the way they like it. But in Portero, where the weird and wild run rampant, the Cordelle sisters are hardly the oddest or most dangerous creatures around.
It’s no surprise when Kit and Fancy start to give in to their deepest desire—the desire to kill. What starts as a fascination with slicing open and stitching up quickly spirals into a gratifying murder spree. Of course, the sisters aren’t killing just anyone, only the people who truly deserve it. But the girls have learned from the mistakes of their father, and know that a shred of evidence could get them caught. So when Fancy stumbles upon a mysterious and invisible doorway to another world, she opens a door to endless possibilities….


Something Fresh (e-book) by P.G. Wodehouse

To start my Wodehouse Challenge

One thing that constantly disrupts the peace of life at Blandings is the constant incursion of impostors. Blandings has impostors like other houses have mice. Now there are two of them—both intent on a dangerous enterprise. Lord Emsworth"s secretary, the efficient Baxter, is on the alert and determined to discover what is afoot—despite the distractions caused by the Honorable Freddie Threepwood"s hapless affair of the heart.

You would think Petronella’s sixteenth birthday would be cause for celebration. After all, fashionable friends are arriving at her country estate near London, teas are being served, and her coming out party promises to be a resplendent affair. Everything is falling nicely into place, until, suddenly—it isn’t. For Petronella discovers that her guardian, Uncle Augustus T. Percival, has developed a most unVictorian compulsion: He must eat bugs. Worse still, because he is her guardian, Uncle Augustus is to attend her soiree and his current state will most definitely be an embarrassment.
During the festivities, when Petronella would much rather be sharing pleasantries with handsome Lord James Sinclair (swoon), important guests are disappearing, kidnapping notes are appearing, many of the clues are insects, and Uncle Augustus is surreptitiously devouring evidence. It’s more than one sixteen-year-old girl should have to deal with. But, truth be told, there is far more yet to come . . . 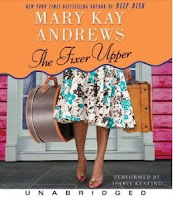 After her boss in a high-powered Washington public relations firm is caught in a political scandal, fledgling lobbyist Dempsey Jo Killebrew is left almost broke, unemployed, and homeless. Out of options, she reluctantly accepts her father's offer to help refurbish Birdsong, the old family place he recently inher­ited in Guthrie, Georgia.

But, oh, is Dempsey in for a surprise when she arrives in Guthrie. "Bird Droppings" would more aptly describe the moldering Pepto Bismol-pink dump with duct-taped windows and a driveway full of junk. There's also a murderously grumpy old lady, one of Dempsey's distant relations, who has claimed squatter's rights and isn't moving out. Ever.

All Dempsey can do is roll up her sleeves and get to work. And before long, what started as a job of necessity somehow becomes a labor of love and, ultimately, a journey that takes her to a place she never expected—back home again.

The Ring of Solomon (audio) by Jonathan Stroud, read by Simon Jones 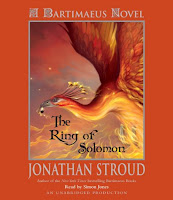 Bartimaeus, everyone’s favorite (wise-cracking) djinni, is back in book four of this best-selling series. As alluded to in the footnotes throughout the series, Bartimaeus has served hundreds of magicians during his 5,010 year career. Now, for the first time, fans will go back in time with the djinni, to Jerusalem and the court of King Solomon in 950s BC. Only in this adventure, it seems the great Bartimaeus has finally met his match. He’ll have to contend with an unpleasant master and his sinister servant, and runs into just a “spot” of trouble with King Solomon’s magic ring....

Email ThisBlogThis!Share to TwitterShare to FacebookShare to Pinterest
Labels: books I bought, From the Library, weekly round-up