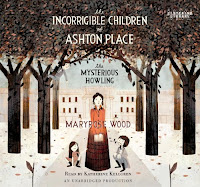 Penelope Lumley has been engaged as a governess to three children, three feral children, that is.  The Incorrigibles were found in the woods of Ashton Place and it's now Miss Lumley's job to civilize them.  But there mysteries abound.  Who are these children?  And what is Lord Ashton hiding?  And why is Old Timothy, the coachman always sulking around? So many questions and this is just the beginning.

I want to say "think A Series of Unfortunate Events mixed with a penny dreadful and The Jungle Book"  And that might come close,  but A Mysterious Howling is not depressing like ASoUE (one of my favorite series but really depressing if you read the whole thing at once).  In fact, it's jolly good fun.  Miss Lumley steps up to the plate of basically training these wolfish children and turning them into normal humans.  While she can be a bit officious, she is a great deal of fun and I loved her approach to the children.

There are plenty of mysteries raised in the first book of this series.  Why are there three feral children living in the woods at Ashton Place?  Why did Lord Ashton keep them?  What the heck is going on?  I can't wait to read more because I am really glad I got this from the library.  It is a delightful book that I highly recommend.

This is the second book that I've listened to narrated by Katherine Kellgren, the first one being The Red Pyramid.  I did not like her voice in that book.  I found it grating.  So when the audiobook began and I heard her voice, I groaned.  But I think she did an excellent job as the reader and I liked the voices she put to the characters.  I think my problem with her before stemmed from that book being a two narrator book.  She doesn't have the smoothest voice but it lent itself nicely to Miss Lumley and the Victorian feeling of the book.  I'll be happy to listen to her again if she is the narrator of The Hidden Gallery.

Hogwarts: Charms
Whisper in my Ear
Posted by Andrea