This week I'm reading Mockingjay (Collins)!  And then I don't know what else.  I"m in a bit of slump now but I do plan on reading a couple of Nancy Drews: The Ringmaster's Secret and The Scarlett Slipper Mystery.  I'm listening to The Red Pyramid (Riordian).

Last week I read The Extraordinary Secrets of April, May, and June (Benway).

From the publisher
It's a Book by Lane Smith 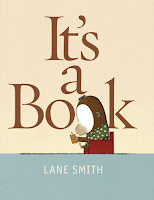 (A picture book that is so very cute)
It’s a Book is about a book loving monkey, a tech savvy jackass and a straight talking little mouse.

Won from GreenBeanTeenQueen
What's Your Status? by Katie Finn

In a dangerous world, Deep Salt strikes terror into the heart of everyone. Hari lives in Blood Burrow, deep in the ruined city of Belong, where he survives by courage and savagery. He is scarred from fighting, he is dangerous and cruel, but he has a secret gift: he can speak with animals. When his father, Tarl, is taken as a slave and sent to the mine known as Deep Salt, from where no worker ever returns, Hari vows to save him. Pearl is from the ruling families, known as Company, which has conquered and enslaved Hari's people. Her destiny involves marriage that will unite her family with that of the powerful and ambitious Ottmar. It soon becomes clear that the survival of their people depends entirely upon the success of Pearl and Hari's mission.
Posted by Andrea