This is going to be a long post today.
This week I'm reading Fire (Cashore) and I'll start on Hush, Hush (Fitzpatrick) and The Whispering Statue (Keene).  I'm listening to One for the Money (Evanovich) and then Wicked (Maguire).

Since last week I've read Rampant (Peterfreund), The Clue in the Hollow Oak (Keene), and The Mystery of the Ivory Charm (Keene).


Abandoned: Band Geek Love (Bloss): What I said on Twitter I'm abandoning "Band Geek Love." I got 1/2 through and couldn't go on. I have better than things to read than a book about a horrible, stuck-up, whiny little girl and her nonexistent problems. Ugh. I have a high tolerance for BS but this is a huge NO.  It has a sequel so I'm guessing someone else like it.  That person wasn't me.  I'd do a post but I have nothing nice to say except that the writing was good and I don't want to do a post about a book that made me want to shake the main character in a very bad way.

Book I won:
I won Rampant like 7 months ago from Carrie Ryan.  Well, I finally got my autographed copy in after bugging her like 5 times.  I am sadly persistant.  Anyway, here are a few pics. 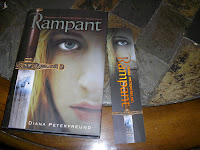 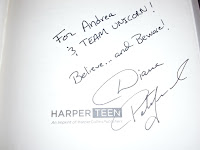 Not A Girl Detective - Susan Kandel

(part of my Nancy Drew re-fascination, also a book I've been meaning to read since I like mysteries)
"Biographer and amateur sleuth Cece Caruso freely admits that she spent her youth idolizing girl detective Nancy Drew, a fantasy that undoubtedly influenced her grown-up job writing biographies of dead mystery writers. But as Cece will discover driving down the highway in her Jackie O. sunglasses and a borrowed baby-blue Cadillac, some fantasies die harder than others." "Researching the life of Carolyn Keene, the pseudonymous author of the Nancy Drew mysteries, Cece meets a flamboyant collector of "Blue Nancys," the original books with blue covers. When he finds out that she is taking a road trip to Palm Springs to snoop around at the annual Nancy Drew fan convention, he offers her the use of his swanky vacation house. But the last thing Cece expects to find lying around the swimming pool is one very dead body." In a race against time that takes her from a secret enclave of restored Victorians near downtown L.A. to the driest stretches of California desert, Cece will have to channel her former idol and then some to unmask a sly killer - before he comes after her. Of course, it helps to have a knockout collection of vintage clothing, though Cece prefers Azzedine Alaia semigloss knits and Halston silver sequined berets to Nancy's prim suits and gloves.

Carter Finally Gets It - Brent Crawford

(recommended by someone a long time ago.  Jill maybe?)
Meet Will Carter, but feel free to call him Carter. (Yes, he knows it's a lazy nickname, but he didn't have much say in the matter.)
Here are five things you should know about him:
1. He has a stuttering problem, particularly around boobs and belly buttons.
2. He battles Attention Deficit Disorder every minute of every day...unless he gets distracted.
3. He's a virgin, mostly because he's no good at talking to girls (see number 1).
4. He's about to start high school.
5. He's totally not ready.
Join Carter for his freshman year, where he'll search for sex, love, and acceptance anywhere he can find it. In the process, he'll almost kill a trombone player, face off with his greatest nemesis, suffer a lot of blood loss, narrowly escape death, run from the cops (not once, but twice), get caught up in a messy love triangle, meet his match in the form of a curvy drill teamer, and surprise the hell out of everyone, including himself.

(love her Gallagher Girl series and the cover is just cool)
When Katarina Bishop was three, her parents took her on a trip to the Louvre...to case it. For her seventh birthday, Katarina and her Uncle Eddie traveled to Austria...to steal the crown jewels. When Kat turned fifteen, she planned a con of her own--scamming her way into the best boarding school in the country, determined to leave the family business behind. Unfortunately, leaving "the life" for a normal life proves harder than she'd expected.

Soon, Kat's friend and former co-conspirator, Hale, appears out of nowhere to bring her back into the world she tried so hard to escape. But he has good reason: a powerful mobster has been robbed of his priceless art collection and wants to retrieve it. Only a master thief could have pulled this job, and Kat's father isn't just on the suspect list, he is the list. Caught between Interpol and a far more deadly enemy, Kat's dad needs her help.

For Kat there is only one solution: track down the paintings and steal them back. So what if it's a spectacularly impossible job? She's got two weeks, a teenage crew, and hopefully just enough talent to pull off the biggest heist in history-or at least her family's (very crooked) history. 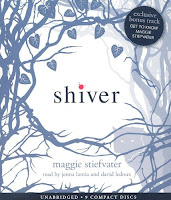 (I've heard good things and the cover is so pretty)
For years, Grace has watched the wolves in the woods behind her house. One yellow-eyed wolf--her wolf--is a chilling presence she can't seem to live without. Meanwhile, Sam has lived two lives: In winter, the frozen woods, the protection of the pack, and the silent company of a fearless girl. In summer, a few precious months of being human . . . until the cold makes him shift back again.

Now, Grace meets a yellow-eyed boy whose familiarity takes her breath away. It's her wolf. It has to be. But as winter nears, Sam must fight to stay human--or risk losing himself, and Grace, forever.
Posted by Andrea

Email ThisBlogThis!Share to TwitterShare to FacebookShare to Pinterest
Labels: abandoned, From the Library, weekly round-up