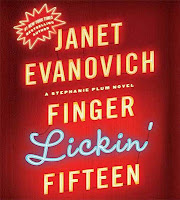 Lulu witnesses the decapitation of a famous chef and the murders are after her.  Stephanie takes a job helping Ranger find a burgler who is breaking into his security company's clients' houses.  Add in a little Grandma Mazer and a whole lot of BBQ and you have another hilarious Stephanie Plum novel.

This was a nice departure from the usual formula of Stephanie being in a danger.  The focus is switched to Lulu but Stephanie suffers from some collateral damage as a result of always being with Lulu.  The killers are dumb as rocks so the whole book involves a chase right up to the very end.  I also enjoyed the Ranger mystery.  Stephanie isn't dumb.  She is actually very smart and intuitive.  She's just no good as a bounty hunter, but she's an excellent detective.  I like that about her.

Stephanie and Morelli are on a break in this book and she hangs out with Ranger a whole lot.  Which is nice because I like it when she is with Ranger.  But if I was on a break from Morelli, you can bet I'd be sleeping with Ranger first chance I get because damn!  That's a whole lot of sexy.  But she's more cautious than me.
Posted by Andrea