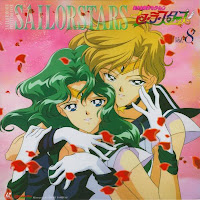 For the March mini-challenge of the GLBT Challenge instead of reading and reviewing a manga dealing with that subject I've decided to talk about one of my favorite series of all time, Sailor Moon, and the relationship between Sailor Neptune and Sailor Urnaus.

In both the anime and the manga, as civilians Mirchiru (Michelle US) is a very girly and beautiful musician and Haruka (Amara US) is an androgynous race car driver.  Everyone who meets Haruka thinks she is a boy and it leads to some confusion and hilarity especially when Usagi (Serena) and Minako first meet them.  In the manga and in the Japanese anime, it is established that they are in a relationship with each other.  There are many moments, some funny, some very touching, to establish their relationship.  It is taken as natural and normal.  They obviously love each other and they have the most mature of the relationships shown in Sailor Moon.

When it came time to dub their episodes in the United States in 2000, however, their relationship was changed to "cousins" since it was believed that a lesbian relationship would not be acceptable for a children's cartoon even though there is nothing overt about their relationship other than some hand holding and a little "couple" talk.  This made for some very interesting changes especially in the episode with the love challenge which was changed to the friendship challenge with only male/female couples besides Michelle and Amara.  It also made the animation seem off since they would talk about one thing, but the images invoked a different sort of tone.  There were also many changes of Haruka flirting with Usagi where Amara would say something about flirting with Darien (Mamoru) in order to make her "straight."  It was a ridiculous change.  I doubt that they would include the relationship if they re-dubbed the series, but I would hope they wouldn't make them cousins because it is just creepy.
Posted by Andrea