This week I'm reading The Whispering Statue (Keene) and Going Bovine (Bray).  I'm listening to The Year of the Flood (Atwood) and Wicked (Maguire).

Since last week I've read Fire (Cashore), Hush, Hush (Fitzpatrick), Heist Society (Carter) and The Truth of My Bat Mitzvah (Baskin).
I've listened to Breathing Underwater (Flinn) and One for the Money (Evanovich).


Awards:
Beverly at The Wormhole gave me the Happy 101 Award and the "Your Blog is sooooo Kewl" Award.  Thanks so much.  These always brightens my day.

Chrissie at Chrissie's Corner gave me the One Lovely Blog Award.  Thanks so much!  I appreciate it a lot. 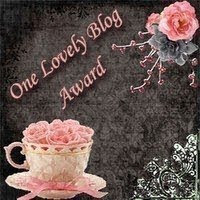 Books in the mail:
From Carrie Ryan, I got The Dead-Tossed Waves (squee) and some great swag.  This has move swiftly up my TBR list. Here are some pics: 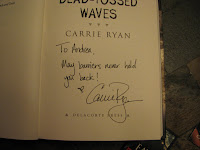 From the Library is my weekly listing of what I checked out from the library recently.
A few newer titles this week.   I have so much to read.  I need to stop.

(Printz winner and one of the currently one of the best YA authors)
Cameron Smith, 16, is slumming through high school, overshadowed by a sister “pre-majoring in perfection,” while working (ineptly) at the Buddha Burger. Then something happens to make him the focus of his family's attention: he contracts mad cow disease. What takes place after he is hospitalized is either that a gorgeous angel persuades him to search for a cure that will also save the world, or that he has a vivid hallucination brought on by the disease. Either way, what readers have is an absurdist comedy in which Cameron, Gonzo (a neurotic dwarf) and Balder (a Norse god cursed to appear as a yard gnome) go on a quixotic road trip during which they learn about string theory, wormholes and true love en route to Disney World. Bray's surreal humor may surprise fans of her historical fantasies about Gemma Doyle, as she trains her satirical eye on modern education, American materialism and religious cults (the smoothie-drinking members of the Church of Everlasting Satisfaction and Snack 'N' Bowl). Offer this to fans of Douglas Adams's Hitchhiker's Guide to the Galaxy seeking more inspired lunacy.

(I liked the first one though it was a little scary.  Can't wait to read this one.)
Mally and Merry Brynn thought that with the death of David Jellico, their nightmarish visions of the future and past were gone for good. Now, Merry's only worries revolve around cheer tryouts, and Mally has slipped back into her homebody, tomboy ways.

Then a cheerleader lands in the hospital. And a mysterious, beautiful mountain lion is maimed.

When they begin to suspect their friend Eden was involved in both events, Merry and Mally are catapulted back into a world of visions that they do not yet understand. And this time, they must race to prevent the people they love most from unspeakable tragedy.

(loved Suite Scarlett and she is so awesome)
Ever since Mrs. Amberson, the former-aspiring-actress-turned-agent, entered Scarlett Martin's life, nothing has been the same.

She's still in charge of the Empire Suite in her family's hotel, but she's now also Mrs. Amberson's assistant, running around town for her star client, Chelsea - a Broadway star Scarlett's age with a knack for making her feel insignificant.

Scarlett's also trying to juggle sophomore year classes, her lab partner who is being just a little TOO nice, and getting over the boy who broke her heart.
In the midst of all this, her parents drop a bombshell that threatens to change her New York life forever...

I Dreamed I Married Perry Mason is the debut novel in a hip, sexy, smart and, yes, cozy mystery series with a great hook. Think Sex and the City collides with Murder, She Wrote.
All that writer Cece Caruso really wants to do is complete her biography of mystery legend Erle Stanley Gardner, find a vintage 1970s Ossie Clark gown to add to her collection, and fix the doorknob on her picturesque West Hollywood bungalow. Then a chance visit with a prison inmate who knew Gardner lands her right in the middle of a 40–year–old murder and another case where the blood is still warm. In fact, Cece finds the body. This brings her into irresistible contact with her inner personal sleuth and shows how crime and greed can reverberate through several generations of a single family.

(can't wait to read it)
Incarceron -- a futuristic prison, sealed from view, where the descendants of the original prisoners live in a dark world torn by rivalry and savagery. It is a terrifying mix of high technology -- a living building which pervades the novel as an ever-watchful, ever-vengeful character, and a typical medieval torture chamber -- chains, great halls, dungeons. A young prisoner, Finn, has haunting visions of an earlier life, and cannot believe he was born here and has always been here. In the outer world, Claudia, daughter of the Warden of Incarceron, is trapped in her own form of prison -- a futuristic world constructed beautifully to look like a past era, an imminent marriage she dreads. She knows nothing of Incarceron, except that it exists. But there comes a moment when Finn, inside Incarceron, and Claudia, outside, simultaneously find a device -- a crystal key, through which they can talk to each other. And so the plan for Finn's escape is born ...
Posted by Andrea

Email ThisBlogThis!Share to TwitterShare to FacebookShare to Pinterest
Labels: awards, From the Library, weekly round-up