Lord Sunday (Keys to the Kingdom 7) 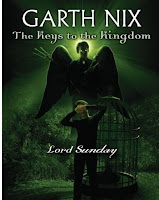 Jacket:
The House is falling apart, and when it is is destroyed, all existence will be destroyed with it.  Arthur Penhaligon and his friends Leaf and Suzy are caught in the chaos, separated by events but drawn together in their fight to survive.  They must use every power at their disposal - magical or practical - to defeat the enemies attacking them from all sides.
For Arthur, the biggest challenge come from Lord Sunday, the most elusive of the Trustees of the Will.  Lord Sunday's magic is unlike any Arthur has encountered before - and his secrets have the potential to destroy not only Arthur but also the people he holds most dear.
On Monday, Arthur Penhaligon was just an ordinary boy thrust into an extraordinary situation.  From Tuesday to Saturday, he emerged as the Rightful Heir to the Architect who created everything within the House.   Now, on Sunday, he will face a choice of astonishing proportions - the remarkable conclusion to the a completely unforeseen adventure.

On the seventh day, there was a choice.


He stood above Arthur, holding the writhing Keys in the net with his left hand, while his right was held tight around a small object that he wore on a chain around his neck. p.72

Monday I checked this book out at 5:30 p.m. and started reading almost right away.  I was done at 10:30.  I HAD to find out what happened.  When we last left Arthur, he was trying to wrest the Sixth Key away from Superior Saturday during a battle in the Incomparable Gardens.  Now comes the thrilling conclusion to one of the best series that I've read.  I am very happy with how it turned out.  The only I can't figure out is why the narrative was split up between Leaf, Arthur, and Suzy.  I mean, I was glad to know what was going on, but I can't figure out why it was necessary.

Anyway, a lot of the time a series will end and it will be such a disappointement.  Like I wasted so much time on this series and this is the ending I'm given.  But not with the Keys to the Kingdom.  I was very excited by the ending, surprising in a good way  Just right, I think.


I'd like to say more but I really don't want to spoil anyone.  OK, here are few things in white.  DON'T highlight unless you want to read the MAJOR SPOILERS.*

I liked how Arthur became the New Architect and put a part of himself into a boy so that he could live out his life on Earth.  I wonder though how that will play out.  Because if Arthur is immortal, then eventually he will have to go back to the House and merge with the New Architect.
I was not surprised that Dame Primus turned out to be the Architect.  I think everyone had figured that out, but I was surprised that the whole thing was a suicide plot to release the Old One so She could return to nothing.  It was such a great twist.  And the part where she bit into the apple.  I could almost hear the crunch and the silence.  So great.  I guess if the Trustees had done what the Will said in the beginning, then it wouldn't have been such a big battle.  But who knows who they would have chosen to the Rightful Heir and thusly the New Architect?  I can't really blame them for not wanting to aid in their own destruction.
And, hahaha, I love the ending with Suzy.  She is so great.
**END SPOILERS**