Since last week I've finished The Secret Hour (Westerfeld) and posted a review of The Muppets Christmas Carol. I finished A Christmas Story (Shepherd) and Skipping Christmas Grisham) on audio, but those reviews are coming later.

From the Library is my weekly listing of what I checked out from the library this week.
I only got a few this week.

(liked The Secret Hour, need to finish this challenge) The Midnighters of Bixby, Oklahoma, know that their town is full of secrets. These five teenagers are the only ones who know about the mysterious hour at midnight when the world freezes, except for them and the creatures that inhabit the darkness.
But they do not know why earlier generations of Midnighters all disappeared, or why they are now the only Midnighters in town. As they learn more about the secret hour's twists and turns, they uncover terrifying mysteries woven into the very fabric of Bixby's history, and a conspiracy that touches both the midnight hour and the world of daylight.
At the same time, the Midnighters' own secrets start to emerge, including some that were never meant to come to light, changing the fragile dynamics among the five. 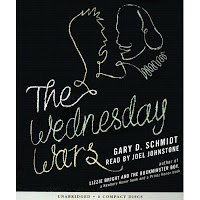 (Jill at the O.W.L. recommended this and said it was funny).Meet Holling Hoodhood, a seventh-grader at Camillo Junior High, who must spend Wednesday afternoons with his teacher, Mrs. Baker, while the rest of the class has religious instruction. Mrs. Baker doesn't like Holling—he's sure of it. Why else would she make him read the plays of William Shakespeare outside class? But everyone has bigger things to worry about, like Vietnam. His father wants Holling and his sister to be on their best behavior: the success of his business depends on it. But how can Holling stay out of trouble when he has so much to contend with? A bully demanding cream puffs; angry rats; and a baseball hero signing autographs the very same night Holling has to appear in a play in yellow tights! As fate sneaks up on him again and again, Holling finds Motivation—the Big M—in the most unexpected places and musters up the courage to embrace his destiny, in spite of himself.