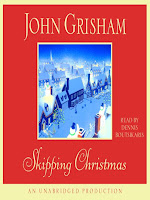 With his daughter off to the Peruvian jungle for a year with the Peace Corps, Luther Krank convinces his wife to take all the money they spend on Christmas and go on a cruise instead.  Little does he know how their friends and neighbors are going to react to the idea of skipping Christmas

Skipping Christmas is one of my annual Christmas books.  I listen to it every year and I still find it amusing.  There are always details that I forget and parts I think are funny or maddening every year.  This is my fifth year, I believe.

The thought that occurred to me this year is how outraged his neighbors are by the idea that the Kranks aren't going to go along with the usual trapping of Christmas.  It seems the idea that a married couple with no children at home enjoying a vacation together alone is impossible to these people and they act in a very unChristmas-y way.  And yes, Luther Krank is a bit of an ass about the whole thing, but all he wants to do is get through Christmas without a tree or carols or putting a giant Frosty the Snowman on the roof.  And the reactions of everyone around him are absurd, but amusing.  And frankly, I'm right there with Luther.  The part of this book that aggravates me every time is the Krank's reactions when said daughter calls to surprise them that she is actually coming home for Christmas.  Keep in mind that it's only been a month since she was gone.  The mother, Nora, is excited as is Luther, but what gets me is that I don't know, personally, any parents of this age who would willingly drop a vacation that they've been planning to run around the city preparing for a holiday they had no intention of celebrating.  Instead of saying, honey we weren't expecting you, we didn't decorate or plan to do much if they really wanted to keep their trip a secret, they run about getting angry and doing stupid things while their neighbors give Luther a hard time.

But I think the message of the book might come at the end.  Because really no one was really acting with the true Christmas spirit until the very end anyway, not the neighbors or the friends or even Luther.  But with the act of kindness at the end, the book redeems everyone and shows that people have kindness in their hearts, they just have look for it sometimes.  And Christmas isn't about the stuff.  It's about the people you love and kindness and good will.
Posted by Andrea