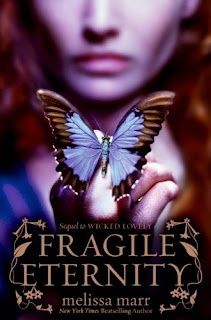 Seth is a mortal who is in love with the Queen of the faery Summer Court, Aislinn. He is vulnerable and weak compared to her and he will die one day while she will live eternal. Added to this strain is the Summer King to whom Aislinn feels an irrevocable pull and an upheaval among the faery courts that is slowly leaning toward war. How will Seth and Aislinn stay together when there is so much pulling them apart?

**SPOILERS if you haven't read these **

Frankly, though, I got a little tired of Aislinn's whining and the continued reminder that she was joined to the Summer King and felt a pull towards him. Yeah, I got that, let's move on. It made it harder to relate to Seth's devotion to her and his willingness to give up his mortality, his humanness for her. I really like Niall, the Dark Court King and I prefer him there instead of in the Summer Court. Really, that was the whole point of Ink Exchange in my view, to get Niall into the position as the Dark King. And the whole point of Fragile Eternity was to make Seth a faery and set up the coming war and Bananach and her sister's own conflict.
Posted by Andrea