Harry Potter and the Deathly Hallows (audio) by J.K. Rowling 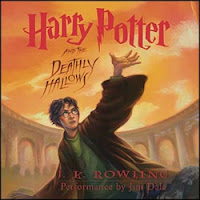 I started my "re-listen" back in May and I don't think I realized I would finish up the series as late as December, but I'm finally done now.  I love this series.  Truly love it.  Anyway, Deathly Hallows is one of my favorites.  Though, frankly, I could do with a little less camping.  I know that it means something and all, but I still wish for a little less camping.  I don't have many criticisms of it.  I know that the big info dump at the end with Dumbledore is a lot and most people don't like it.  I doesn't bother me that much though this time I realized just how long that scene is and I was kind of waiting for it to be over.  I still get a bit confused about Harry's blood in Voldemort and the whole true possessor of the wand thing.  So much relied on chance at the end.  But the final mano-a-mano fight between Harry and Voldemort is great and very badass on Harry's part.  The epilogue is fine.  It's nice to see how they all ended up and I love the Harry/Ginny marriage and, of course my favorites, Ron and Hermione.  Great book, great series, well worth visiting again and again.