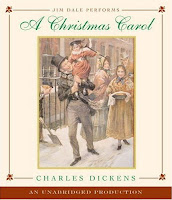 This is the first time I have ever listened to A Christmas Carol.  Lucky for me the narrator just happens to be Jim Dale, narrator of the Harry Potter series and one of my all-time favorite narrators.  I love his voice so much and he does an excellent job as usual though some of his voices seemed to carry over from Harry Potter and so there was one character who sounded a bit like Hagrid to me.  That might be because I listened to this simultaneously with Deathly Hallows though.

It's funny what things listening to a book can bring to light versus reading it.  I never noticed the dialogue skips and how the book is so wordy.  I still enjoyed it though.  It is such a classic Christmas book and one I don't mind reading over and over.  I'd like to try a different narrator next year just to see how someone else reads it.

I wanted to see this last year when it came out but I never got around to it.  I watched it the other day with my husband and son.  We enjoyed it for the most part though I think the ghosts might have scared my son (who is 4) a little.  Definitely he was scared by Marley's ghost and the Ghost of Christmas Yet-to-Come.  The animation was pretty though I didn't care for how the humans looked except maybe Scrooge.  He came out alright.  I really liked how the Ghost of Christmas Yet-To-Come was brought to life (so to speak) and how it turned out.  I was fine with the other ghosts as well.  I liked that it followed the book very accurately and they didn't just let Jim Carrey run amok all over it.  There were only a few points where his general overacting came out but he was a good Scrooge and I liked his voice for the part.  He did a good job overall.  I think I would watch it again.  It was one of the most faithful animated adaptations that I have seen.
Posted by Andrea