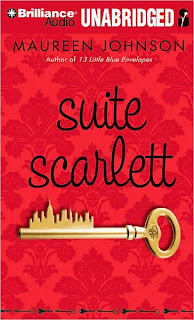 Scarlett Martin was not going to have a good summer anyway. But her family's hotel is broke and now Scarlett is stuck working there. And on her 15th birthday Scarlett receives the Empire Suite and a permanent guest, Mrs. Amberson.
Meanwhile, Scarlett's brother, Spencer, is trying to get his acting career going so he can avoid culinary school. When Mrs. Amberson gets involved in Spencer's new play, the summer gets a whole lot more interesting. Can Mrs. Amberson save Spencer and Scarlett?


I've read Suite Scarlett before and enjoyed it. Scarlett is a nice girl who really loves her brother and wants to help him. When she gets involved with Eric from her brother's play, she doesn't quite know how to handle that relationship and Eric doesn't make it easy for her. I saw a lot of Eric and Scarlett's relationship when I was in college so it definitely felt real. And Mrs. Amberson was such an Auntie Mame character, I expected her to say "Life's a banquet and most poor suckers are starving to death." But I enjoyed that as much as I've always loved Auntie Mame. In a way, this book reminds me of an old film, an Auntie Mame or Bringing Up Baby, but for some reason Good News comes to mind (haven't seen it? you should).

Lately I've been listening to a lot of books I've read before. Sometimes outside narration changes a book. Sometimes the narrator are so bad that they ruin the book. Jeannie Stith is the narrator of Suite Scarlett. She does a good job. Some of her inflections were strange and I though she needed to speed up Mrs. Amberson's speech pattern. But her voice is pleasant and clear so it was okay by me.
Posted by Andrea