Lent to my Nook by my mom
Absolutely, Positively by Heather Webber

“Exposed” by a Boston Herald reporter, Lucy is suddenly the talk of the town. Long back-story short: Even though the rest of her Valentine ancestors were blessed by Cupid with psychic abilities, Lucy’s only special power lies in her ability to find things. This skill has proven quite a blessing for those who come to her matchmaking agency in search of finding their long-lost loves. Now that Lucy’s secret is out, she has more new clients than she knows what to do with. But soon a certain man of mystery steals Lucy’s spotlight…
No, it’s not Sean Donahue, the sexy fireman-turned-private-eye who’s stolen Lucy’s heart. It’s a masked man in a cowboy hat, dubbed “The Lone Ranger,” who’s been throwing handfuls of cash across the Common. Now all of Beantown’s abuzz. Can Lucy unmask the mysterious money man, track down all her clients’ old flames, and turn up the heat on her love life? Absolutely, positively…

Nature is out of balance in the human world. The sun hasn't shone in years, and crops are failing. Worse yet, strange and hostile creatures have begun to appear. The people's survival hangs in the balance.To solve the crisis, the oracle stones are cast, and Kaede and Taisin, two seventeen-year-old girls, are picked to go on a dangerous and unheard-of journey to Tanlili, the city of the Fairy Queen. Taisin is a sage, thrumming with magic, and Kaede is of the earth, without a speck of the otherworldly. And yet the two girls' destinies are drawn together during the mission. As members of their party succumb to unearthly attacks and fairy tricks, the two come to rely on each other and even begin to fall in love. But the Kingdom needs only one huntress to save it, and what it takes could tear Kaede and Taisin apart forever.
The exciting adventure prequel to Malinda Lo's highly acclaimed novel Ash is overflowing with lush Chinese influences and details inspired by the I Ching, and is filled with action and romance.

Airborn (audio) by Kenneth Oppel, read by a full cast 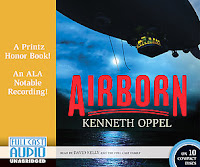 Matt Cruse is a cabin boy on the Aurora, a huge airship that sails hundreds of feet above the ocean, ferrying wealthy passengers from city to city. It is the life Matt's always wanted; convinced he's lighter than air, he imagines himself as buoyant as the hydrium gas that powers his ship. One night he meets a dying balloonist who speaks of beautiful creatures drifting through the skies. It is only after Matt meets the balloonist's granddaughter that he realizes that the man's ravings may, in fact, have been true, and that the creatures are completely real and utterly mysterious.

In a swashbuckling adventure reminiscent of Jules Verne and Robert Louis Stevenson, Kenneth Oppel, author of the best-selling Silverwing trilogy, creates an imagined world in which the air is populated by transcontinental voyagers, pirates, and beings never before dreamed of by the humans who sail the skies

Darkness Becomes Her by Kelly Keaton

Ari can’t help feeling lost and alone. With teal eyes and freakish silver hair that can’t be changed or destroyed, Ari has always stood out. And after growing up in foster care, she longs for some understanding of where she came from and who she is. Her search for answers uncovers just one message from her long dead mother: Run. Ari can sense that someone, or something, is getting closer than they should. But it’s impossible to protect herself when she doesn’t know what she’s running from or why she is being pursued.
She knows only one thing: she must return to her birthplace of New 2, the lush rebuilt city of New Orleans. Upon arriving, she discovers that New 2 is very...different. Here, Ari is seemingly normal. But every creature she encounters, no matter how deadly or horrifying, is afraid of her.
Ari won’t stop until she knows why. But some truths are too haunting, too terrifying, to ever be revealed.

Peter is thrilled to leave New York City to accompany his parents on an expedition to Greenland to study global warming. There he has visions of things that should be too far away for him to see.

Generations ago, the people of Thea’s community were hunted for possessing unusual abilities, so they fled beneath the ice. Thea needs help that only Peter can give. Their meeting reveals secrets of both their pasts, and changes the future for them both forever.

Lucy Rose: Here's the Thing about Me (audio)  by Katy Kelly, read by Tara Sands

I’m Lucy Rose and here’s the thing about me: I am eight and according to my grandfather I have the kind of life that is called eventful, which means NOT boring. According to my mom and my grandmother I’m what they call a handful. And according to my dad I am one smart cookie.

I say I am one girl who is feeling not-so-sure about things on account of my parents got a separation. Plus my mom and I just moved to Washington, D.C. Plus I haven’t met any friends yet but I do know someone who is not one and that is Adam Melon, who I call Melonhead.

Here’s another thing about me: most of the time I am plain hilarious.

Email ThisBlogThis!Share to TwitterShare to FacebookShare to Pinterest
Labels: books I bought, From the Library, in the email, weekly round-up