This week I'm reading Crime Wave at Blandings (Wodehouse) and The Clue of the Whistling Bagpipes (Keene) and I'm listening to Harry Potter and the Deathly Hallows (Rowling) and A Season of Gifts (Peck).

Last week I read Inside Job (Willis), The Education of Madeline (Williamson) and Shopgirl (Martin) and finished listening to Harry Potter and the Half-Blood Prince (Rowling).

Books that I bought at the library book sale:

On the banks of the Mississippi River, Tennyson Fontaine and her sister, Hattie, play endless games of hide-and-seek and make up fantastical stories about the latest adventures of their wild dog, Jos. But when their mother doesn’t come home and their father sets off to find her, the sisters are whisked away to Aigredoux, the once-grand plantation of their ancestors, now in ruin.

Caught in a strange web of time, dreams, and history, Tennyson comes up with a plan to shine light on Aigredoux’s past and bring her mother home. But like so many plans, Tennyson’s has unexpected consequences.

All Kat wants is to be normal, or at least to look that way to students at her new school. But her mother is a medium, and not the kind that fits in between small and large; Kat's mom is the kind of medium who sees spirits and communicates with them. And, even worse, Kat has just discovered that she can see spirits too. In fact, she seems to be the only one capable of helping a spirit at her school cross over successfully. The question is can she do it without needing to switch schools herself?

The Maze was only the beginning...

Solving the Maze was supposed to be the end. No more puzzles. No more Variables. And no more running. Thomas was sure that escape meant he and the Gladers would get their lives back. But no one really knew what sort of life they were going back to.

In the Maze, life was easy. They had food, and shelter, and safety... until Teresa triggered the end. In the world outside the Maze, however, the end was triggered long ago.

Burned by sun flares and baked by a new, brutal climate, much of the earth is a wasteland. Government has disintegrated--and with it, order--and now Cranks, people covered in festering wounds and driven to murderous insanity by the infectious disease known as the Flare, roam the crumbling cities hunting for their next victim... and meal.

The Gladers are far from done running. Instead of freedom, they find themselves faced with another trial. They must cross the Scorch, the most burned-out section of the world, and arrive at a safe haven in two weeks. And WICKED has made sure to adjust the variables and stack the odds against them.

Thomas can only wonder--does he hold the secret of freedom somewhere in his mind? Or will he forever be at the mercy of WICKED?

Being a Greek god is not all it once was. Yes, the twelve gods of Olympus are alive and well in the twenty-first century, but they are crammed together in a London townhouse—and none too happy about it. And they've had to get day jobs: Artemis as a dog-walker, Apollo as a TV psychic, Aphrodite as a phone sex operator, Dionysus as a DJ.

Even more disturbingly, their powers are waning, and even turning mortals into trees—a favorite pastime of Apollo's—is sapping their vital reserves of strength.

Soon, what begins as a minor squabble between Aphrodite and Apollo escalates into an epic battle of wills. Two perplexed humans, Alice and Neil, who are caught in the crossfire, must fear not only for their own lives, but for the survival of humankind. Nothing less than a true act of heroism is needed—but can these two decidedly ordinary people replicate the feats of the mythical heroes and save the world?

Love the One You're With by Emily Giffin 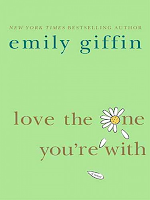 The New York Times bestselling author of Something Borrowed, Something Blue, and Baby Proof delivers another captivating novel about women and the choices that define them. This is the story for anyone who has ever wondered: How can I truly love the one I'm with when I can't forget the one who got away?
Ellen and Andy's first year of marriage doesn't just seem perfect, it is perfect. There is no question how deep their devotion is, and how naturally they bring out the best in each other. But one fateful afternoon, Ellen runs into Leo for the first time in eight years. Leo, the one who brought out the worst in her. Leo, the one who left her heartbroken with no explanation. Leo, the one she could never quite forget. When his reappearance ignites long-dormant emotions, Ellen begins to question whether the life she's living is the one she's meant to live.
Love the One You're With is a powerful story about one woman at the crossroads of true love and real life.