Harry Potter and the Half-Blood Prince (audio) by J.K. Rowling 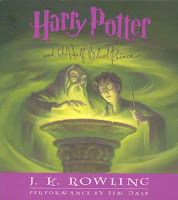 The Half-Blood Prince is one of my favorite HPs though the last bit kills me.  When I get to the part with the phoenix song I always cry.  Though I found myself wanting to defend Snape's actions in the hosptial wing scene after everything had happened.  Which is so funny because the first time I read it, I was so angry at him.  These books are such an emotional investment.

I like the unfolding of the Horcrux storyline through the memories and the background on Voldemort.  It shows how went from a little psychopath to a very big psychopath and how his own orphaned state lead him down a such a different path than Harry's.  It's amazing how much of the little things from the past books start coming together here to continue on through Deathly Hallows.