What I'm reading with my son


I thought I'd share the books that my 6 year old son is asking me to read. He is on his way to learning to read himself but of course still needs me to read him his bedtime stories. Not that I mind.

The illustrations are just beautiful in this one and  he loved the story because it is told from the perspective of a little boy who saves the babies. The protagonist reminds me a little of my son since my son refers to his little sister as Baby.


The Day the Babies Crawled Away by Peggy Rathmann

What a lovely day at the fair. Children lining up for pony rides . . . moms and dads in a pie-eating contest . . . babies chasing butterflies . . . babies heading for the trees . . . I SAY! Where are those babies GOING? Only a small boy sees them leaving and follows as the babies chase butterflies in trees, frogs in a bog, even bats in a cave, ignoring pleas to come back. But not to worry, our hero saves the day, making sure that all the babies get home safely from their appealing adventures.

Caldecott Medal winner Peggy Rathmann has created a highly original story told in a lilting text and a bold new style with classic black silhouettes against stunning skies of many colors that change and glow as afternoon turns into evening.

He loves this book! I have the enhanced version on my Nook that reads it to him but so when he reads it he tries to do the same voice as the reader. It is pretty funny.


Shark vs. Train by Chris Barton, illustrated by Tom Lichtenheld 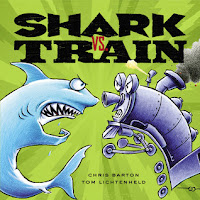 If you think Superman vs. Batman would be an exciting matchup, wait until you see Shark vs. Train. In this hilarious and wacky picture book, Shark and Train egg each other on for one competition after another, including burping, bowling, Ping Pong, piano playing, pie eating, and many more! Who do YOU think will win, Shark or Train?

This is one of his favorites. We read it at least 3 times a week. He likes how Anansi tricks the other animals and he loves to yell out KABOOM and to look for Little Bush Deer in all the pictures.


Anansi and the Moss-Covered Rock by Eric A. Kimmel, illustrated by Janet Stevens 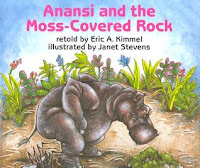 Anansi the Spider tricks all the animals, until he's taught a lesson.

We are also trying out short chapter books. His aunt got him #19 in the Magic Tree House series and at first he didn't want to read it but then he got invested in it and wanted to know how it ended. So when it was over I bought him the next one.

Jack and Annie are ready for their next fantasy adventure in the bestselling middle-grade series—the Magic Tree House!

That's what Jack and Annie are up against when they are whisked away to the land of Australia. And they're not alone! Jack and Annie must help a baby kangaroo and a koala escape from a fire-filled forest. Will they be able to rescue the animals in time?