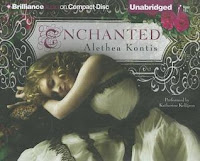 Sunday is the seventh daughter of a seventh daughter and it expected by her father to be extraordinary as a result. But the most extraordinary thing about Sunday is that things she writes down come true, but not always in a desirable way. So she sticks with writing down truths about her family. One day she meets a talking frog in the forest and the two of them kindle a friendship that deepens into love. When Sunday kisses him, he turns out to be the crowned prince and someone Sunday's family hates. Can Rumbold woo Sunday and make her love him as the man he is?

This was adorable! It is sort of a mish-mash of fairy tale elements combined into a totally unique yet recognizable story. I love fairy tales and I love fractured fairy tales the most.  I also love the use of the fortune-telling rhymes* as the names and futures of all of Sunday's sisters and for her mother's family**. This story included so many things like changelings and giant beanstalks and witches with apples but it was all fairly subtle so not to take too much from one story.

Sunday is a sweet and goodhearted girl. Rumbold gets less of a good treatment but mostly because he can't remember too much and so his characterization is a little less rounded. But he is still a good guy if a bit misguided in his attempts to woo Sunday. I do that that the first thing he does after becoming a man again is call for three royal balls to attract Sunday.

There is a lot of interesting backstory that is mentioned but not explored fully. Jack Jr., the oldest son, adds a mysterious element to the story and is the cause of the animosity that the Woodcutter family holds against the prince. Monday, the eldest sister, has the princess in the bed backstory but she is not a big feature and I wish there was more on her. At least Saturday is getting her own book soon and that should be exciting.

Katherine Kellgren is one of my favorite narrators of all time and she is the reason I picked out this book. I was looking for a new audio book and searched for something she narrated. I'm glad I did. This was an excellent book and a good choice. Kellgren is such great reader. She always does her books justice. I can't believe that once did not like her though that may have been more the book than her performance. I will admit that there were parts in this book that I found a bit grating particularly the bits about Rumbold. But I don't know if that is due to Kellgren's voice or the book itself. It sometimes can be hard to separate the two in an audio book.


**One for sorrow,
Two for joy,
Three for a girl,
Four for a boy,
Five for silver,
Six for gold,
Seven for a secret never to be told.
Posted by Andrea